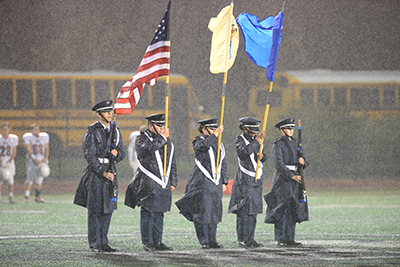 The heavy rain didn’t wash out the football game in Long Branch on Friday night. However, the Scarlet Knights of Wall Township washed out any hopes of a Green Wave victory with a 27-7win.

With 5:59 left in the first quarter the Wall hit the scoreboard first with a 41-yard touchdown run by Sean Larkin. Tim McKernan kicked the extra point giving Wall a 7-0 lead. The first quarter ended with no other points added.

In the second quarter Wall scored again. This time Larkin ran 47 yards and McKernan was good on the extra point giving the Scarlet Knights a 14-0 advantage.

However, Long Branch didn’t give up. They were able to move the ball and capped it off with a 15-yard touchdown run by Keith Cooper. The extra point was good and Long Branch was within seven going into the halftime break.

Dan George, head coach of the Green Wave, had a good halftime talk with his players as they came out and played a much better second half. They forced the Scarlet Knights to punt on their first possession of the third quarter which left Long Branch in good field position.

The Wave was moving the ball and controlling the game until Shane Richey of Wall made one of the biggest plays of the night. He intercepted Long Branch QBJuwan Wilkins and returned the ball 65 yards for another Scarlet Knights touchdown. The extra point was good and Wall was up 21-7.

The final touchdown of the game came in the fourth quarter. It was the third rushing-touchdown for Larkin, four yards out. The extra point kick for Wall failed, but they had enough and beat Long Branch 27-7 and remained unbeaten.
It does not get any easier for the Green Wave this weekend. Friday night they travel to Middletown South where the undefeated Eagles will host them in a B North game.

Both schools play in the competitive Shore Conference Class B North division and the Scarlet Knights of Wall remain undefeated with that victory over Long Branch. Wall and Middletown South are both 4-0, with Red Bank Catholic and Manasquan at 3-1. They are followed by the Middletown North 2-1, Ocean Township 2-3 and the Green Wave are now 1-2 on the season.

Presenting the colors before the kickoff on a cold rainy night at Long Branch High School was the Air Force Jr. ROTC.

The only Green Wave touchdown was a 20 yard run by Keith Cooper (4) a senior running for Long Branch in the loss to Wall.