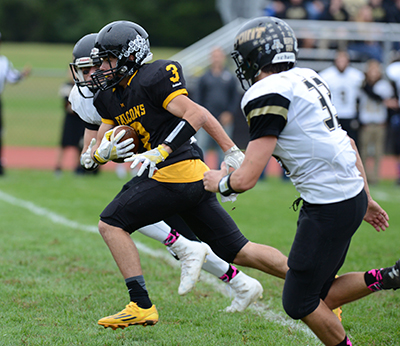 Looking for some running space is Eli Rife (3) a sophomore for the Falcons of Monmouth Regional.

Saturday afternoon the Falcons of Monmouth Regional hosted the Panthers of Point Boro, and it’s a game that they hope to put behind them. It was a nondivisional game, but the Panthers completely dominated the game winning 42-0.

On their very first offensive play of the game Dayshawn Porter, sophomore quarterback, fumbled the ball which Point Boro recovered on the Falcons 35 yard line. Four plays later the Panthers scored their first of six touchdowns.

Point Boro scored their second touchdown on their second offensive series. It was a 56 yard reverse giving them a 14-0 lead after the first quarter. They scored again with 7:38 left to play in the first half. This time it was a short one yard run.

Porter suffered a hit on his hip and was replaced by Jay Eustace, captain of the Falcons who has been out with his own injury. He made two big throws getting Monmouth Regional in the red zone. However, he fumbled the ball at the Panthers 10 yard line with 3:19 left to play in the first half.

Monmouth Regional had a big play by Elijah Walker, senior defensive back, who intercepted a Point Boro pass and returned it to the Panthers 15 yard line with 1:47 left in the second quarter. However, the Falcons were then facing a fourth and 20, as they went backwards.

Eustace dropped back and attempted a pass to Jalen Gates at the goal line. The Panthers were called for pass interference, giving Monmouth Regional a fourth and eight. They were unable to convert and with two seconds left in the half they turned the ball over on downs.

In the third quarter Point Boro added two additional touchdowns. The first was a 69 yard run and a six yard run. Both extra points were good and they were up 35-0 which according to the NJSIAA rules allows for a running clock.

In a quick fourth quarter the Panthers scored their final touchdown on a seven yard run and the extra point was good giving them a 42-0 victory. They had 386 rushing yards on 40 carries. They only completed 1 of 3 passes for seven yards and had one picked off by Walker.

Monmouth Regional had a horrible day on the ground. They gained six rushing yards on 20 carries. They were better in the air completing 7 of 13 passes for 120 yards with two interceptions. Eustace was 6 of 10 for 96 yards with both interceptions. Nick Alfano, sophomore, also came in as quarterback and completed 1 of 3 passes for 24 yards. Porter was 0 for two.

Picking off a Point Boro pass for Monmouth Regional was Elijah Walker (11) a senior.

Looking for some running space is Eli Rife (3) a sophomore for the Falcons of Monmouth Regional.