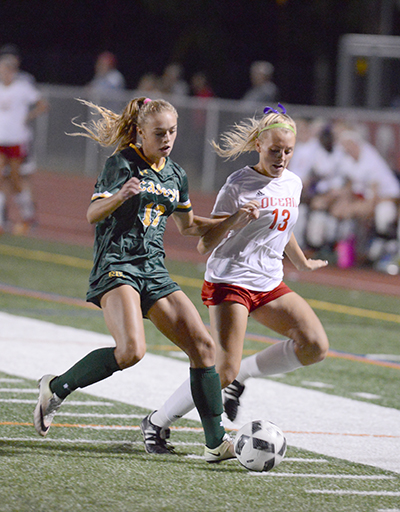 Anna Clearly (13) of Red Bank Catholic and Amanda D’Auria (13) of Ocean race after a loose ball.

Can you imagine being a parent of a two-year-old little girl and receiving new from her doctor that she is very ill? One week before her third birthday you are given the news that your little angel has cancer.

That’s exactly what happened to the parents of Anastasia. We are withholding the last name and first name of the parents to help shield them during this horrible time. However, some very giving people who suffered their own loss of a child heard about Anastasia and decided they would help.

Kelly Terry runs The Mya Lin Terry Foundation which was started in memory of her little girl. Mya passed away on April 10, 2013 at the tender age of ten. She had been fighting cancer for nearly six years. She conquered Non-Hodgkin’s Lymphoma, but suffered Secondary AML, received three relapses and three stem cell transplants from three separate donors.

Mya was a fifth grader in Ocean Township and touched the lives of thousands of individuals. After her passing The Mya Lin Terry Foundation decided they needed to help other youngsters in the township suffering from that terrible disease.

Five years ago the c Township High School wanted to do something to help Mya, and decided that one of their soccer games should be a fundraiser; “Kicking Cancer’s Butt, One Game At A Time” became their slogan.

Red Bank Catholic High School has been the opponent three out of the five years and has also bought into the fundraising efforts. Both teams sell shirts, 50-50 tickets and help promote the game. It is a tremendous show of sportsmanship and kindness.

“We are so happy that RBC is once again able to share this special night with us,” said Kelly Terry before the start of the game. “Many of you already are aware, but if you are not, this event was created by the Ocean Township girls’ varsity soccer team five years ago to show their love and support for Mya Terry. Mya was battling two cancers and had just arrived at the St. Jude Children’s Hospital in Memphis in order to take part in a research study, and receive her second and third stem cell transplants. The Ocean girls wanted to do something to help and established this game as a fund raiser and to raise awareness.”
J

ohn Scoras, head official that night, walked over to Kelly Terry as she walked off the field. “There is a reason I am here tonight. I would like to donate my official’s fee to the foundation in memory of my daughter, Sara,” said Scoras. His daughter passed away when she was seven years old from cancer. “Sara would be 20 years old today and we miss her every single minute of every single day. I would hate for another parent to feel that loss so donating my fee for another family is the least I can do.”
T

his year the foundation, RBC and the Spartans raised over $3,000 for Anastasia and her family. The t-shirts are designed every year by Beth Conti are sold out all the time. They also sell the food; meatball subs, sausage and pepper subs, baked ziti, penne vodka, mac-n-cheese and much more.

Moment of Magic Disney Princesses is an organization of college girls who dress up as Disney princesses and visit sick children were also at the game to bring out smiles in the youngsters. “They stayed the entire night and made little Anastasia’s night. We had a huge turnout and have to thank the Big Red Army and members of the Ocean Township High School band for their support,” added Terry.

As for the soccer game itself, Ocean won 3-1 and remains 5-0 in the Mya’s Cup Challenge. The Red Bank Catholic goal was scored in the first half by Jyllissa Harris. In the goal for the Caseys was Anthi Panayides, who had eight saves.

Ocean had goals by Sydney Maxwell, Jamie Richter and Madison Volek. Julia Loeser of Ocean had two assists and Lila Rice had one in the victory. Ocean used two goal keepers in the win. Ava Hiers had five saves and Tyler Bartlett made four saves in the net.

Attempting to head the ball into the Spartan goal is Sophie Demurjian (12) a senior for the Caseys and defending is Madison Volek (15) a freshman at Ocean.

Anna Clearly (13) of Red Bank Catholic and Amanda D’Auria (13) of Ocean race after a loose ball.

“This is a great tradition that the Spartans started and I hope it continues for years and years,” added Terry.