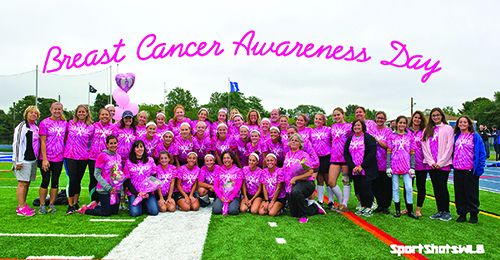 The Shore Regional Field Hockey team and coaches all decked out in pink.

October is breast cancer awareness month and the field hockey team of Shore Regional wasted no time in going pink. The Blue Devils hosted Freehold Borough on the first and all the players were in pink shirts doing their part for awareness.

The pink game was organized by the Shore Regional Field Hockey alumni association to honor cancer survivors from the Blue Devils program.

“Our players were honored to play for Ronelle, Marcia, Sue and Julie who have each courageously battled breast cancer,” said Kelly Koenig, head coach at Shore.

According to Koenig, the committee purchased shirts for the entire field hockey program, freshman, junior varsity and varsity squads.

“This game is a true testament to the ideal that tradition never graduates in our program. The alumni committee have strong ties to our program and community and they are teaching our current players that this program and their experiences while being a member of Shore field hockey has helped to shape their work ethic and the way in which they face challenges in their lives,” added Koenig.

“When Coach Williams retired a few of the alumni got together to recognize all that she had accomplished in her career. What we realized as we prepared to honor her when speaking with other alumni is that it wasn’t about her win/loss record, but rather the life lessons she instilled in us and the friends we made,” said Chris Wajda, member of the alumni committee. “We are a family, and that family dosen’t end when you graduate. The pink game was an opportunity to be there in support for each other and crecognize the bravery in Ronelle, Marcia, Sue and Julie when they battled breast cancer. This gave us an opportunity to let our four honorees know that they are not alone and we stand with them.”

Shore scored one goal in the first half and the final two in the second half. Lily Santi scored two of the Blue Devils goals and the other was placed in the cage by Maggie Lamb. Kelsey O’Neill had two assists and Emmalee Olsen had one in the win. In the goal for the Devils was Molly Santi who made nine saves.

The Shore Regional Field Hockey team and coaches all decked out in pink.