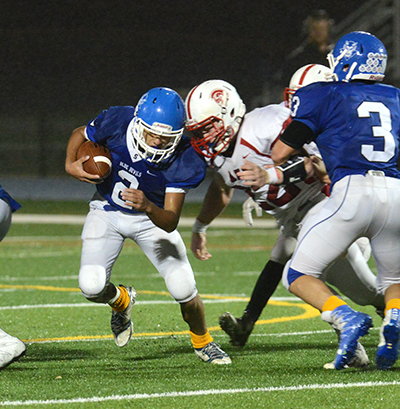 Breaking through the line of scrimmage for Shore Regional is Gil Goldsmith (2) a sophomore all-purpose player. Shore beat the Trojans of Bishop Ahr 14-7.

Friday was a miserable night to be a high school football fan with driving rain and high winds. Only the diehard supporters were out to cheer their teams on.

Over in West Long Branch the brand new stadium at Shore Regional High School had a decent number of people in the stands. And they were loud and into the game from the opening kickoff. However, for much of the game nothing exciting was occurring.

The Blue Devils hosted the Trojans of Bishop Ahr from Edison in a con-conference game.

For the first three quarters it was a scoreless game with much of the action played between the 30-yard lines. However, with 9:22 left to go in the game the Trojans connected on a 45-yard pass play and extra point to take a 7-0 lead on Shore.

Less than two minutes later the Blue Devils had a huge run by senior quarterback Matt Pennell. According to head coach Mark Costantino the play was a down option. Pennell took off and broke tackles running 75 yards for the touchdown. After the extra point the game was dead even at seven with 7:45 left to play.

Pennell scored the winning touchdown on a 35 -ard sprint with 1:07 left to play.
“It was a good team win, these guys never stopped playing,” said Costantino. He added that Pennell had a great game running gaining 145 yards. “Our defense did a good job of slowing down their offense in the second half.”

Shore plays in the B Central division of the Shore Conference and is currently 3-1 on the season. Mater Dei, which was usually the basement dweller in the division, is currently undefeated at 4-0. Asbury Park, Keyport and Shore are all 3-1, with Point Beach at 2-2 and Keansburg 0-4.

The Blue Devils will travel to Middletown on Saturday to face the undefeated squad from Mater Dei at 1:00pm.

Attempting to block a Bishop Ahr punt is Mike Devine (52) and Vinny DiMaio (behind Devine) of Shore Regional.

Breaking through the line of scrimmage for Shore Regional is Gil Goldsmith (2) a sophomore all-purpose player. Shore beat the Trojans of Bishop Ahr 14-7.