Lions take down the Wave 5-2 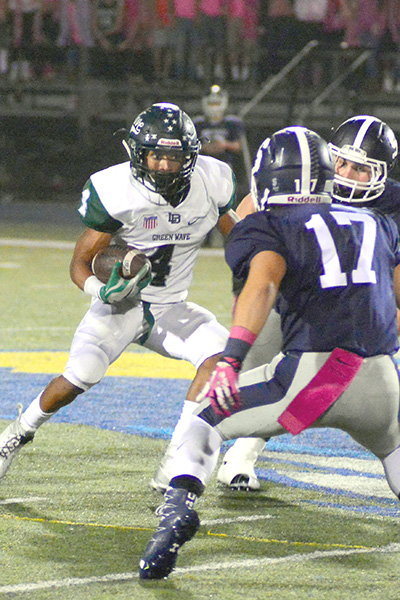 By Skip Pierce, photos by PIERCEBROSPHOTO.SMUGMUG.COM

The Long Branch football team got any early sign they were in for a long night when they went up against Middletown South. It was a very early sign in fact as South’s Samson Dube took the opening kickoff 75 yards into the end zone.

Spotting the Eagles, ranked first at the shore and sixth statewide, a quick seven points in their house was the first step to a 35-7 loss.
Long Branch showed resilience in the following series with QB Juwan Wilkins going to the air on the first play and connecting with Timothy “TJ” Fosque for 14 yards.  Fosque would pull in another pass before the Branchers ultimately stalled and punted.

The Wave continued with that resilience on defense and stopped the next Eagle drive at the LB 13 yard line forcing South to go for the field goal.  However, Long Branch was charged with encroachment on the field goal attempt giving Middletown a first down, new life and another shot.  The Eagles cashed in and scored their second TD of the evening with 6:50 remaining in the first quarter.

The Branchers managed to keep the Eagles from scoring again for the balance of the first quarter and most of the second quarter but blew a couple of opportunities along the way.  Kevin Porch intercepted a pass in the first quarter and returned it to the South 43-yard line but the Wave failed to capitalize and was forced to punt.

Later in the second quarter LB mounted a threat with consecutive receptions by Fosque and Pasa Fields but that drive fizzled out in the face of a relentless Eagle defense. South scored their third touchdown of the first half when QB Aneesh Agrawal connected with Jack Krellin for a 32-yard scoring aerial with 3:26 remaining in the first half.

The Eagles were in the hunt to score yet again in the first half driving into Wave territory.  However, Elijah Sherin intercepted a pass intended for Damson Dube to end the threat, but the Wave faced a 21 – 0 deficit going to the halftime break.

In the second half Long Branch continued the trend of failing to capitalize. Shawn Gonzaga fielded the opening kickoff with a sparkling return to the LB 49-yard line.  However the Branchers then went three and out.

In the South possession that followed linebacker Luke Arnold fired in and dislodged the ball from Eagle running back Anthony Summey.  Kevin Porch was once again involved in a beneficial turnover, recovering the fumble in South territory. However, two plays later LB gave it back with an interception at the South 25-yard line and yet another opportunity evaporated.

Long Branch finally put together a 65-yard scoring drive in the fourth quarter that included receptions by three different Wave players in a textbook display.  Back up QB Marc Dennis engineered the march starting with a seven-yard pass completion to TJ Fosque.  Dennis connected for 15 yards with Shawn Gonzaga and then bootlegged for five yards.

A nine-yard reception by Pasa Fields penetrated the red zone to the 14-yard line.  On the next snap QB Dennis bootlegged up the middle and passed the line of scrimmage on blocks by linemen Kevin Cerruti and Desmond Blackmon.  Shawn Gonzaga took out the linebacker as Dennis scrambled 14 yards into the end zone for the lone Long Branch score.

In spite of surrendering 35 points the LB defense included some outstanding plays.  Lineman Desmond Blackmon, who ì”he voice of Long Branch” Bruce Clay refers to as “the little engine that could”, executed a few of his signature shoestring tackles at the line.  Linebacker Luke Arnold was a menacing presence throughout the contest.  Senior linebacker Leo Morabito was also credited with several stops.

The Wave will next host Red Bank Catholic on Friday evening