Plan for synagogue and up to seven stores approved 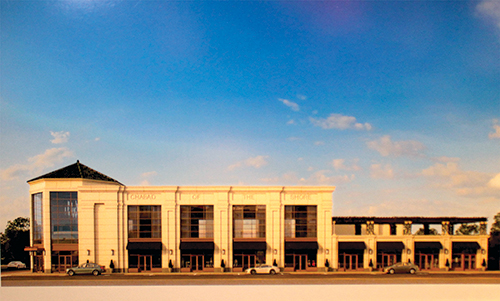 By Neil Schulman
Long Branch — The Planning Board has unanimously approved plans for a synagogue and 12,000 square feet of retail on the block in West End where the old movie theater is. 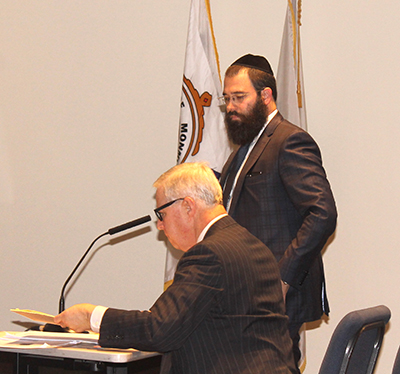 Rabbi Laibel Schapiro and attorney Steven Tripp describe their plans for the block of Ocean Avenue where the former movie theater currently sits.

The theater and several other buildings along Ocean Avenue, between Brighton Ave. and West End Court, will be torn down to make way for a three story structure, the Menachem Learning Institute. The current parking lot behind it, in bad condition, will be repaved and expanded to 94 spaces. Chabad of the Shore, who will run the synagogue, says the lot will usually be open to the public.

At the Oct. 5 Long Branch Planning Board meeting, Rabbi Laibel Schapiro, Director of Chabad of the Shore, said the 16,000 square-foot second floor would be used as a synagogue, meeting hall, and for other synagogue uses and functions. A smaller third floor will hold classrooms.

In addition to services, Chabad intends to offer a preschool for 20-30 children. Schapiro said they have no plans to expand that to later grades.

Last year, as part of the West End District Overlay passed by the city, it became legal to build houses of worship in West End, on the second floor of a structure, if most of the first floor was dedicated to commercial use.

The building, described as neo-classical, will have a stone facade, with significant glazing. The side closest to West End Court, the synagogue entrance, will have a dome.

While the front floor will have a small synagogue for weekday services, 12,000 square feet of it will be for retail. Architect Steven Carlidge said that up to seven retail establishments could be open, each having its own entrance along Ocean Avenue and in the rear. If someone expresses interest in more floor space, there might be fewer establishments.

The synagogue’s entrance will be separate from the retail ones.

The side facing West End Park will have wall panels that open up, allowing interaction. For example, a restaurant might use it to offer outdoor dining. However, the building does not encroach on the park, just abut it.

“We are on our property,” said Carlidge. “We are not taking any of the park.”

In addition, there will be some drainage improvements made to improve runoff. There are currently no improvements.

They will also replace the sidewalks on West End Court, which are bad condition.

Chabad asked for a few variances. They want more signs than permitted under zoning ordinances, because each retail space will likely want its own signs. In addition, they asked for some setback variances for the parking lot. Currently, there are no setbacks, meaning parking is on the edge of the property. The city ordinances require 10 feet, but some of their plans call for cars as close as two to three feet.

They also asked to be allowed to make the lanes to be 24 feet wide instead of the required 25. They said simulations show this is still wide enough for a garbage truck or fire truck to get through, and that the setbacks for parking they propose are an improvement over what exists.

Only one person from the public asked any questions. Dr. James Proodian, owner of Natural Health Care next door, who was concerned about parking.

“I have to make arrangements for parking for up to 20,000 patients a year,” he said. Many relied on the lot on Chabad’s property.

Developers said they are not going to be marking any of the spots are for a specific use, such as reserved for one of the stores. If the synagogue requires many of the spaces due to a special occasion such as a major holiday, they would put out special signs, but in general the lot will be completely open to the public.

The developers also said they had kept Proodian’s property in mind with parking, making sure that there was space around his building the area where his property abuts theirs.

Proodian said that had been his only concern about the project.

“I think the structure is a wonderful idea,” he said.

The Planning Board did suggest putting up signs prohibiting beach parking and overnight parking.

While the proposal was met with heavy resistance when Long Branch introduced the district overlay, no one spoke in opposition to it at the Board meeting.

Board Chair Ed Thomas, when voting yes, said that Chabad had worked closely with the city, and he was very happy with the results, including all the retail it will bring to the area, as well as the appearance.

“The materials you’re using are something I’ve never seen in this city,” he said.

“I think it’s absolutely going to be stunning,” said Board member Esther Cohen.