A folk music legend hits for a triple, at Monmouth U 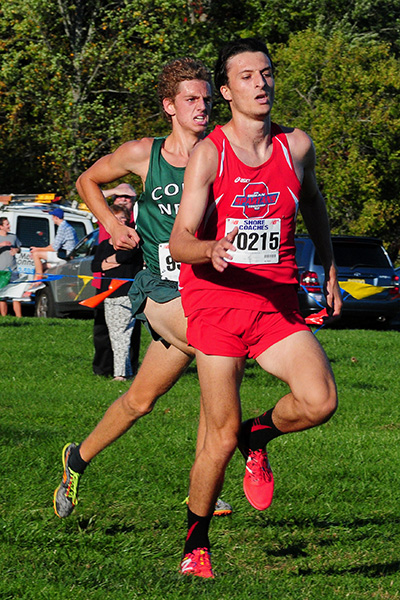 The Monmouth County cross country championships may have invoked a bit of deja vu for Ocean Township senior Elliot Gindi. Gindi captured this crown for the second consecutive year and Jordan Brannan of Colts Neck was the runner up in both the 2015 and 2016 renditions.

What is radically different this year are the times.  The two were just a couple of inches apart coming across here and both were clocked at 16:01 over the Holmdel Park course.  In 2015 Gindi and Brannan posted clockings of 16:21 and 16:31 respectively.

Gindi took the lead immediately at the start with a pack of runners that included Brannan closely giving chase.  One mile into the 3.1 mile race Brannan made a bold surge to the lead intending to create separation from the field.  The strategy worked to a large degree as Gindi gave chase and the pair drew away from the lead pack to run in tandem.
Just before the three-mile mark Gindi made his move and went by the Colts Neck runner, but Brannan had something left and came up on Gindi’s shoulder in the stretch run.  The Spartan went to one more gear to hold off the challenge and crossed the line mere inches in front.  Following the race Elliot disclosed his strategy stating, “My strategy going into the race was to win.  I had to be calm, collected and ready for anything.”

Preceding the county race Gindi has collected a string of invitational championships this season.  On September 16 he captured the Battle of Ocean County Park championship over a field of 136 runners, breaking his own school record for the course and setting a new meet record.  Eight days later the Ocean squad traveled to Wappinger Falls, NY where Gindi topped a contingent of 140 competitors to gain the Bowdoin XC Classic title.

Then on October 1 he posted a 15:48 clocking at the Holmdel course while claiming the New Balance Shore Coaches Invitational Varsity C title over 184 runners.

The winning time established a new Ocean Township school record for Holmdel previously set at 16:01 by Greg Kremler in 2005.

Ocean cross country coach Mark Desomma said of Gindi, “Elliot is an amazing runner.  He has no limits.  He loves to compete and welcomes big challenges.  I have been coaching Ocean XC and track since the early 90s and have top 25 lists for Ocean for all the major courses.  He was motivated to break all our records and Elliot now has every record for Ocean.”