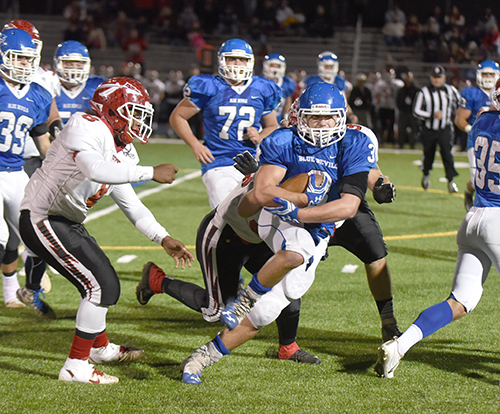 Mark Russo (3) of Shore Regional powers his way through the Keyport defensive line.

It was by far the most exciting football game of the 2016 season for the Blue Devils of Shore Regional. On Friday they hosted the Red Raiders of Keyport in a Shore Conference Class B Central game.

Shore had a lot of pressure on them; if they won they would get the top seed in the NJSIAA Central Jersey Group 1 bracket for the sixth consecutive year.

“That’s a lot of pressure, but these kids are ready to play,” said Mark Costantino, head coach of the Blue Devils. “Keyport is always a tough opponent and are well coached, so this will not be an easy game tonight.”

Shore won the toss and deferred the ball for the second half. Keyport started the game on offense and were forced into a three and out.
On their second offensive play of the game, senior quarterback Matt Pennell faked the hand off and then took off 60 yards untouched for the first touchdown of the game. Gil Goldsmith kicked the extra point and Shore had a 7-0 lead with 9:01 left in the first quarter.

“We decided to give Matt the freedom in deciding to handoff the ball or keeping and it running,” said Costantino. On that second play of the game it was a great read by Pennell, who saw a large hole on the left side of the offensive line.

Keyport was again forced to punt on their second offensive series. When Shore took it didn’t take them long to reach the Keyport red zone. Mark Russo then broke through the Keyport defense and ran 45-yard to the Red Raiders nine-yard line. Josh Campi ran the ball in for the touchdown. Goldsmith was perfect and Shore had a 14-0 lead with 3:21 left in the first quarter.

As the first quarter came to a close Keyport had worked the ball down to the Blue Devils five-yard line. First play of the second quarter Keyport scored and was down 14-7.

During the second quarter Shore had some breakdowns on defense. Before the quarter was over the Red Raiders had second and goal at the Shore two-yard line. And they powered in for the touchdown. At halftime the game was deadlocked at 14.

Third quarter was a defensive battle. With 48 seconds left in the quarter, Pennell ran the ball in from two yards out. The extra point kick failed. Mumblings on the Blue Devils sidelines was they hoped that didn’t come back and hurt them.

Shore was moving the ball and Lukas Jacky had a big gain and was carrying several Keyport players on his back when he was hit from the side and lost the ball. Keyport recovered on their own 23-yard line with 7:26 left to play.

They moved the ball and made several hard calls on fourth down that worked in their favor. They were on the Shore 15 when their quarterback found an open receiver in the end zone for the touchdown. After the extra point kick the Red Raiders were up 21-20.

Shore now had 1:46 left in the game and they started off on the 20-yard line. With a few second left in the game Pennell fired a perfect pass to Campi who was mugged in the end zone. The play occurred directly in front of an official who did not call pass interference on Keyport.

Goldsmith lined up for a 39-yard field goal attempt with two seconds left in the game. The kick was wide left and Shore lost 21-20.

On the ground the Blue Devils had 350 yards with Campi having 103. In the air Shore had problems connecting on two of five passes for only one yard.
Keyport had 209-yard rushing with their top player going 152 yards. In the air they completed four of eight for 49 yards.

Costantino told his players after the game that they need to finish and can’t have a bad quarter like they did to close out the first half. “I don’t think we’re going to get the top seed, but we should be near the top and get a home game in the playoffs,” said Costantino.

On Saturday the seeding for the NJSIAA Central Jersey Group 1 was posted and the Blue Devils were given the top spot for the sixth consecutive year.

“They awarded it to us based on strength of schedule,” said Costantino.
Of the eight teams in this bracket, four are in the Class B Central with Shore Regional, and two beat them during the regular season. Point Beach gets the two seed, Keyport has the three spot, New Egypt follows, with Asbury Park in fifth (they beat Shore during the opening game of the season), Manville, Florence and Keansburg.

Mark Russo (3) of Shore Regional powers his way through the Keyport defensive line.