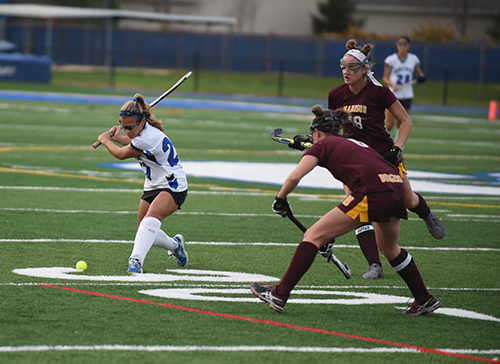 Abby Kopec (27) a junior at Shore Regional winds up for a shot at the Madison goal.

The Blue Devils were the seventh ranked team in the state while Blue Devils was at 17 on the top 20 list. With 3:32 left in the first half Madison scored the only goal of the game.

Shore had opportunities during the second half when they were awarded two penalty strokes. The first one came with 21:10 left in the game. Abby Kopec, junior, was picked by Kelly Koenig, head coach, to take the shot. It was a hard shot that the Madison goalkeeper kicked away.

The second stroke occurred with 5:11 to play. This time Koenig selected freshman Lily Santi to take the shot which went wide left of the goal. They also had 26 corners, where most goals are scored in field hockey.

In the loss senior Molly Santi goalkeeper for the Blue Devils, made 15 saves.

“Losing the sectional final is a heartfelt loss for the team. There were ebbs and flows in the game and the team attempted to adjust and responded to the situations,” said Koenig. She added that they had the momentum in the second half and had those scoring opportunities, but couldn’t make that final finish they needed.

“When we set out this season, the team not only set long term goals but we also understood that they wanted to play a team-centered, passing game.” She said the team never deviated from that concept throughout their season.

In past seasons the Devils always had one or two key players that would dominate a game. “Every player understood that we didn’t have just one player that we relied on. They worked all season to elevate their overall game and I believe, despite our ups and downs this season, this team was able to come together and grow in their playing and understanding of each other as a team,” Koenig said.

One of the unique aspects of the Blue Devils program is that each year the team consists of skilled players who make individual sacrifices in playing time, position changes and whatever it takes to make the team successful. “That is team’s mindset that are willing to make sacrifices and train hard in order to become better,” added Koenig.

Koenig said that this year’s senior class and captains led by Molly Santi, Kelsey O’Neill, and Katie Lamb took ownership of finding a way to get the team in a position to compete. She added that she was proud of those seniors and their commitment to their teammates.

“Each senior has a different story within our program. Some didn’t start until this year and were able to make a strong impact in our team game. While, others have four years of varsity experience and were able to impart their knowledge in helping their younger teammates.” Koenig said.

Shore Regional entered the tournament as the top seed and had a bye in round one. The quarterfinals they faced eight seed South Hunterdon and beat them 4-0. In the semifinals it took the Blue Devils two overtime periods to beat the fourth seed A.L. Johnson.

Working the ball into the circle for Shore Regional is senior Kelsey O’Neill, one of the Blue Devils iri-captains.

Abby Kopec (27) a junior at Shore Regional winds up for a shot at the Madison goal.