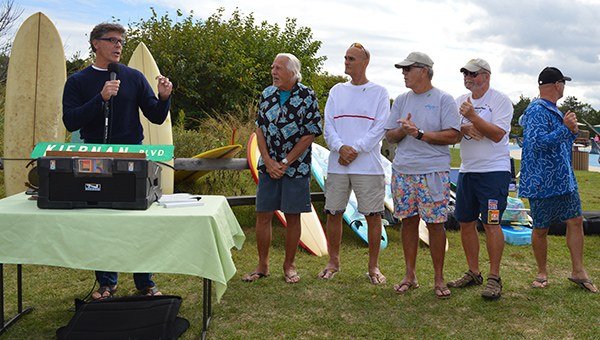 Councilman John Pallone commended the committee for their diligent work on getting the plaque placed at the park.

Long Branch — It took 50 years, but surfers from back in the day finally received the recognition they deserved. On September 24, The Kiernan Surfing Association placed a plaque at Seven Presidents Park, which used to be Kiernan Beach, recognizing a part of the Oceanfront Park that was the birthplace of organized surfing in New Jersey. 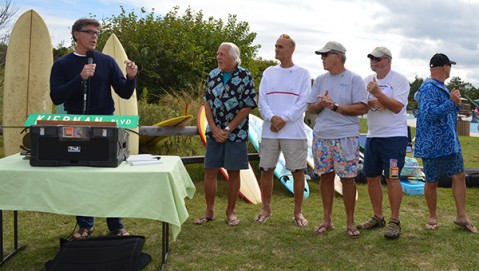 Councilman John Pallone commended the committee for their diligent work on getting the plaque placed at the park.

In 1965, what was then a privately-owned unused beach at the end of Kiernan Boulevard in Long Branch, became the first location where early adopters of surfing could practice their sport exclusively.

At that time, considered too dangerous, surfing was not permitted at almost all the private beach clubs that occupied the New Jersey oceanfront.

On a regular basis police would blow their whistles at surfers to get out of the water, then escort them off the beach.

“Some were not so cooperative,” organizer Ted Geiser told a laughing crowd of over a hundred people. “After ignoring the cops and then giving them a one-finger salute, one surfer was dragged off to jail.” That surfer stood next to Ted in his Hawaiian shirt, smiling and nodding his head.

Then Ted told about how a group of surfers joined hands with George Savoth, a surfing-friendly beach owner and owner of White Sands Beach Club, who agreed to lease the unoccupied beach to them for the purpose of riding waves.

“On one condition,” Savoth told the surfers. “You provide insurance and a lifeguard.” To cover those expenses each surfer paid $20 a year, and that’s how the Kiernan 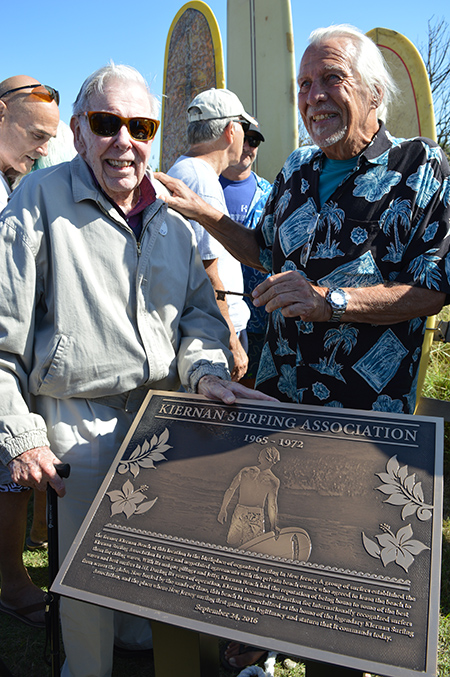 A main contributer to the endeavor was Doctor Lou Salmon (left).

Surfing Association came to be.

The leasing arrangement continued until 1972, when Savoth sold Kiernan beach to the City of Long Branch.

In 1973, the City of Long Branch purchased additional connected beachfront properties, and later, by mutual agreement. the Monmouth County Park System assumed responsibility for operating the beach and established what is now recognized as Seven Presidents Oceanfront Park.

Getting the plaque placed wasn’t an easy task. “Thanks go out to the project development team, Ted Brantly, Todd Thompson, Scott Thompson, Chris Geiling, and Charlie Kunes. We all worked tirelessly on this project, and today we have finally achieved our goal. Special thanks go out to Kiernan member Honorable Ron Reisner for his efforts on our behalf,” said Geiser.

Last year, members of the Kiernan Surfing Association had gathered at the park for a reunion.

This year, they repeated the event with and unveiling of the plaque bearing local surfer and North Long Branch surf shop owner Jimmy Jeffrey, who passed away a few years ago.

The beautiful photo was taken by Greg Brower, who was 15 years old at the time. “I wish I had taken more photos, but film was expensive for a 15-year-old at the time,” he said. “And most of the time my camera was on the beach and I was in the water.”

There were many present who

helped bring the project to fruition, though some could not attend.

“Our final debt of gratitude goes out to Kiernan member Doctor Lou Salmon. Without his contribution, this all would not be possible.

“This is a special day,” Geiser said holding up different plaques presented to the association from several dignitaries. “This was a long time coming.”

Visit www.surfksa.com to order your Friends of Kiernan tee shirts with the Kiernan plaque on the back!

This article originally appeared in the Oct. 6, 2016 print edition of The Link News