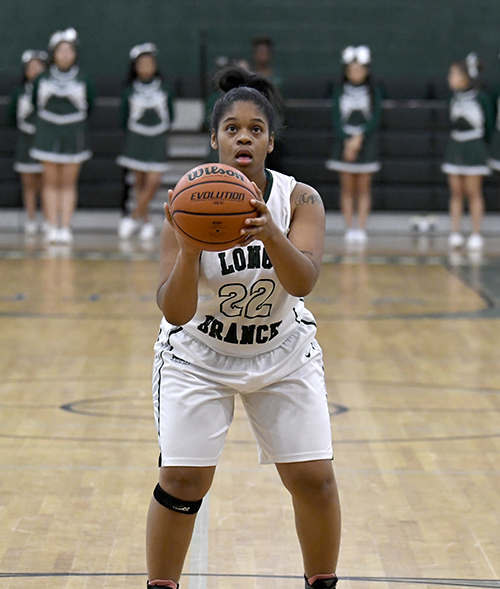 Middletown South took a 16-9 lead after the first quarter and never looked back. They easily beat the Green Wave 73-32 and started the season off 1-0.

Long Branch has Shannon Coyle returning for her fifth season as the head coach. Coyle is highly respected coach on the AAU circuit and she still plays herself in adult recreation leagues. “Tonight, we came out strong and our press was working, but then we got winded,” said Coyle.

The Eagles took advantage of the tired Wave players and picked up their running game and started to open a lead. Besides the lack of conditioning, which Coyle said she will address in the next few practices, Long Branch just turned over the ball frequently.

“Because we couldn’t keep up with them we had to settle back into a man defense and they just took advantage of that,” Coyle said.

Turnovers were a big issue in the loss according to Coyle. “We are down a point guard and people are playing out of position. It’s not an excuse, but they need to control the ball better,” said Coyle. For most of us trying to find a positive in such a one-sided loss would be difficult, but not for Coyle. “In the second half we came out and ran much better sets and stay more composed. However, we dug ourselves such a hole and we tried to climb out of it, but Middletown South is such a good team and they don’t give you much so it was hard getting back into it.”

Going into the halftime break the Eagles held a 43-15 advantage. At the end of three quarters the Middletown South lead was 59-25.

Leading the Wave in scoring was Quayniece Page with 18 points. She also had two rebounds and steals in the loss. Under the boards, Keidy Mar Laureano had a great start to the season pulling down 10 rebounds, scoring three points, had one assists and one steal