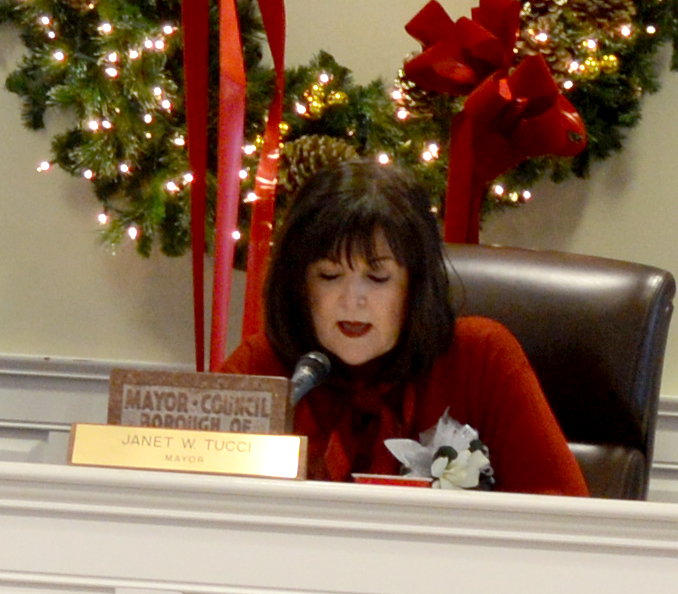 Mayor Janet Tucci led the audience in the Pledge of Allegiance and then welcomed family and friends of officials there to be honored, which included:

The Fire Department’s Steven Nolin was sworn in as Chief and Tim Phillips as Asst. Chief.

Mayor Tucci spoke about John Aria and Jose Villa and and their accomplishments during their time as a councilmen. She welcomed new council members MaryLynn Mango and Stephen Bray and had only good things to say about what they bring to the council.

Mango was a former member of the Shore Regional Board of Education and the West Long Branch Educational Foundation for local schools. “She has surely demonstrated her dedication and commitment to our town,” Mayor Tucci said.

She then spoke about the assets  of Stephen Bray. “Stephen’s acumen as CFO of his own engineering firm will be an excellent resource for our town as he takes over the leadership of the finance committee,” Tucci said.

She added how the residents of West Long Branch will benefit from both of the new council members’ expertise, knowledge and dedication.

Tucci went on to thank her colleagues Susan Juliano,  Fred Migliaccio, Chris Neyhart and John M. Penta, Jr.  How they volunteer countless hours of time and energy to borough business to ensure the town runs efficiently while continually exercising strong physical management standards.  “You are all indeed invaluable assets as part of our borough government.

You are also continually responsive to the concerns of our residents,” Tucci said.

She spoke about changes in the Police Department, with Paul Habermann becoming the new Police Chief replacing Larry Milon upon his retirement in February. “One outstanding police officer replacing another,” she added.

Tucci said that West Long Branch has an outstanding police department, and that was one of the reasons they received permission from the county to paint a blue line down Locust Avenue,  from Broadway to Cedar Avenue, to honor and show their police dept and how much they appreciate them. “I’ve received many calls from people who use that road and don’t live in town, saying ‘congratulations, it’s wonderful honor that you gave your police officers.’”

She spoke of numerous events the various council committees provide throughout the year, from concerts in the park during summer to their 87th annual Christmas sing. She also noted that the Shade Tree Commission continues to plant trees around Franklin Lake.

She mentioned how the borough is saving money by joining the Monmouth County Police dispatch system saving over $100,000 ultimately in their budget. They also saved money by entering into a local agreement with Long Branch for providing the services of chief financial officer. She thanked the residents of the town for paying their taxes in a timely manner despite the snafu the town was thrown into by the untimely resignation of the former CFO.

Tucci offered congratulations to all the officials sworn in as well as the numerous members of the various boards of commissions who have agreed to serve the borough and recognized how much time it takes away from their families. She said it was all these officials who make West Long Branch a great place to live and raise a family.

“I promise to continue my pledge as your Mayor to be readily accessible and responsive as an attempt to provide the necessary leadership.

“May each of you have a New Year filled with good health, happiness and peace.

“God Bless all of you, and God Bless America. May he watch over  and protect all of those brave men and women who continue to defend our freedom.”