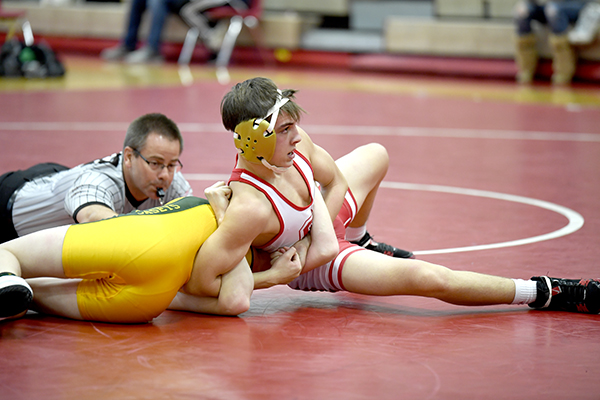 Cippy Apicelli has his Spartan wrestling team at Ocean Township High School off to a great start this season, after racking up a total of 191 points and only allowing 43 during the quad meet they hosted on December 30.

A big part of the success of the program are the assistant coaches on the Spartan staff. Outstanding wrestlers during their high school and college careers are Jeff Sicilliano, Danny Lopes, Joe Falco, Brandon Sheenan, Garry Falco, Jeff Severino and Tom Rant. All these coaches have a wealth of knowledge and experience that is a tremendous benefit to Apicelli and the wrestlers.

During the quad match last Friday, Ocean started off against the Caseys of Red Bank Catholic, a divisional Class B North opponent. This was the closest match of the morning as the Spartans won 58-21.

Up next for the Spartans was another Class B North opponent, the Eagles of Middletown South. Ocean won this match 56-16. This match started at 120 pounds.

The final match of the morning was against Monmouth Regional High School, which only won one match. The Falcons are a nondivisional opponent for the Spartans who easily took a 77-6 victory.

After the these matches the Spartans are 5-0 overall and 4-0 in the B North division of the Shore Conference.

John Columbia of Red Bank Catholic (top) is about to roll Evan Romein of Ocean Township on his back and get a pin at 3:12 of their 182-pound bout.

Red Bank Catholic had a big win at 170 pounds when Steven Cimielewski pinned Muhammad Ali at 2:00 of their match.

Ocean Township 145-pound wrestler Jake Benner (left) gets a pin on Jace Fanelli at 1:45 of their match