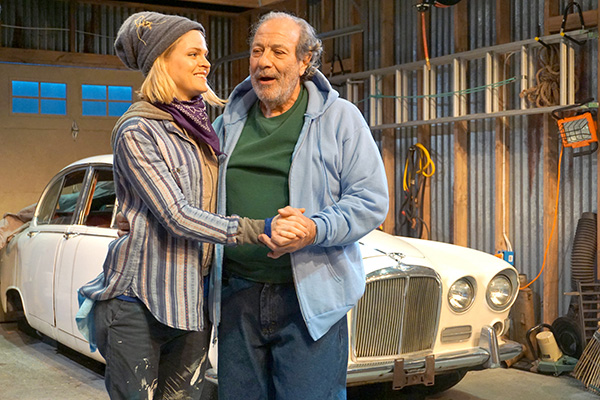 Estelle Bajou and Dan Grimaldi in a scene from the “The Jag” playing thru February 12 at New Jersey Repertory Company, 179 Broadway, Long Branch. (SuzAnne Barabas photo)

By Madeline Schulman
Did W.C. Fields say, “Never work with children or animals,” or should the quote be marked with an asterisk as apocryphal? In either case, we can add “or vintage cars,” because as talented as the three excellent actors in Gino Dilorio’s Jag are, they are constantly upstaged by the beautiful Jaguar which gives the play its title. 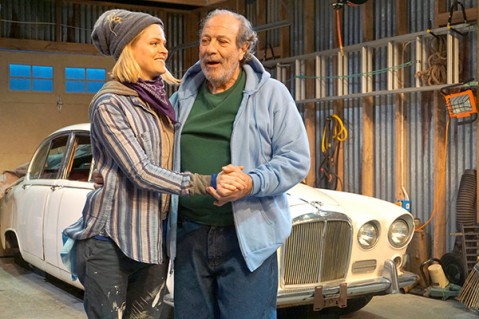 Estelle Bajou and Dan Grimaldi in a scene from the “The Jag” playing thru February 12 at New Jersey Repertory Company, 179 Broadway, Long Branch. (SuzAnne Barabas photo)

The car is the centerpiece of set designer Jessica Park’s meticulously recreated garage, and is the physical and emotional bond holding the three characters together.
Leo “Chick” Chicarelli (Don Grimaldi) suffers from macular degeneration, and cannot see to restore the Jaguar. His son, Donald “Bone” Chicarelli (Christopher Daftsios), is an out of work, failed gambler, living under the shadow of his dead brother David, Chick’s openly acknowledged favorite.
Chick and Bone are at odds over the fate of the Jaguar. Bone wants to sell it. He has a buyer who will pay $20,000 for the car if it is in mint condition and drivable by his deadline. Chick wants to keep the car, because tangible reminders of the past are hard to let go of.
Chick cannot restore the car, and he does not trust Bone, so enter Carla Carr (Estelle Bajou), an intriguing bundle of quirks. Carla is a lesbian who falls somewhere on the autism spectrum. She takes everything literally. Again and again, Chick has to explain that a metaphor or simile is a “figure of expression.” She doesn’t understand how to hold a conversation, answering a request for what she would like for lunch with a long dissertation on microwaving frozen pizza. With all her idiosyncrasies, this “fruitcake” is a genius of Jaguar, with an encyclopedic knowledge and an intuitive understanding of what the car needs and how to fix it.
A rapport between Chick and Carla grows into friendship, leaving Bone more of an embittered outsider than ever.
We are interested in learning the characters’ histories and seeing whether Chick and Bone can ever resolve their differences. But we are equally, if not more interested, in seeing whether the mechanical hero (Carla insists the Jag is masculine) will roar into life and flash its headlights for us.
The Jaguar was bought in Maryland, transported by truck to New Jersey, disassembled at a local garage, transported by pieces through the narrow doors of NJ Rep, and reassembled under the eyes of Jessica Parks and technical director Brian Snyder. If Mr. Dilorio or any other playwright is interested, I would willingly watch a play about that!
* * *
The Jag runs through Feb. 12 at NJ Repertory Theater, 179 Broadway, with performances Thursdays and Fridays at 8 p.m.; Saturdays at 3 and 8 p.m.; and Sundays at 2 p.m.
For tickets and more information, call 732-229-3166 or visit njrep.org.