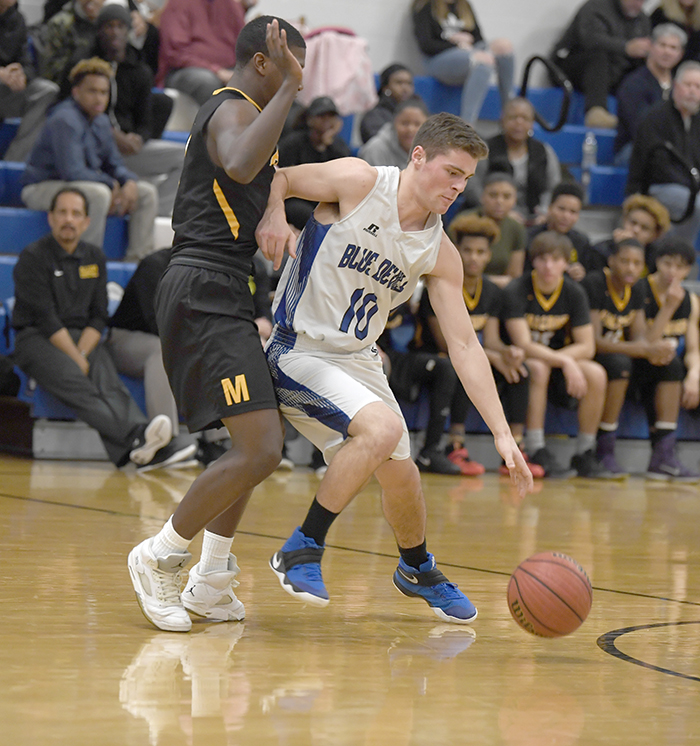 Shore Regional’s Kyle Koob (10) brings the ball over half court during the 48-43 loss to Monmouth Regional. Koob was the highest scorer for the Devils with 13 points.

It appears to be a down year for the boys basketball teams at Shore Regional and Monmouth Regional this season. Both schools are struggling in the win column even though they have talent and skills. On Saturday afternoon Shore hosted Monmouth in a nondivisional Shore Conference game.

During the first quarter of action the Blue Devils were aggressive in the run game and took an early 13-11 advantage over the visiting Falcons. However, the second quarter was all Monmouth as they held the Devils to eight points while they added 16 to their total.

Monmouth Regional applied a full court press during the second quarter which seemed to catch the Blue Devils flat footed as they committed a few turnovers. The Falcons had a definite size advantage over Shore and used it to their advantage to close out the first half.

The third quarter was dead even as both schools scored only eight points. The last eight minutes of the game for Shore was nearly identical to the opening quarter. They bested the Falcons 14-13, but lost the game 48-43.

Kyle Koob was the leading Blue Devils scorer with 13 points, while teammate Chris Panduri finished with 12. Ryan Jones had nine, and Ryan Flanagan scored six points. Shore Regional drops to 4-11 overall and are 2-6 in the A Central division. The standings in the A Central division has Rumson-Fair Haven 8-0 at the top followed by Holmdel 6-3, Matawan 5-4, Red Bank Regional 4-4, St. John Vianney 3-6, Shore Regional and then Raritan at 2-7.

Leading the Falcons in points was Myles Ownes with 16, Tyler Hawkins scored 11, and Nick Cirlincione finished with eight.

Shore’s Ryan Jones (3) goes in for a layup while a Mannino (24) of the Falcons tries to block it.

Joshua Bean (22) of Monmouth Regional take a jumper while Ryan Flanagan (32) of Shore attempts to block it.

Going up for a dunk in the game again Monmouth Regional is Chris Panduri (20) who finished with 12 points.

Shore Regional’s Kyle Koob (10) brings the ball over half court during the 48-43 loss to Monmouth Regional. Koob was the highest scorer for the Devils with 13 points.