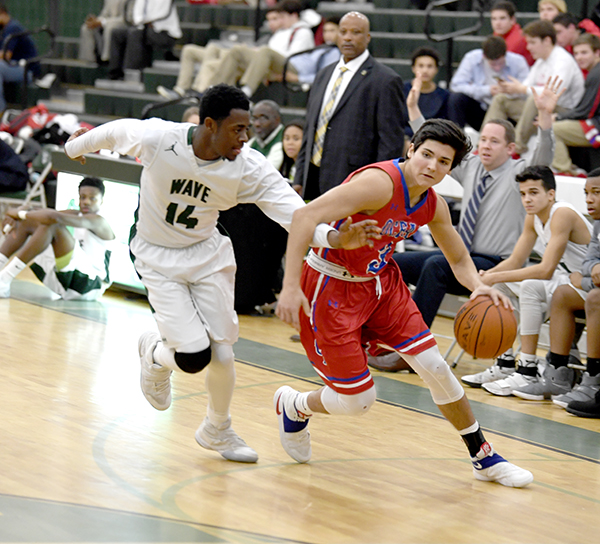 It was rematch time for Long Branch boys basketball as they hosted the Spartans of Ocean Township last week in a Shore Conference Class B North divisional game.

Both schools faced off back on December 20 in Ocean where Ocean pulled off a 58-57 victory. Long Branch was looking to even the score on their home floor in front of their fans and they didn’t disappoint!

Long Branch came out quick in the opening eight minutes using speed and strength they outscored the Spartans 15-8. When the first half had ended the Green Wave squad was out in front of Ocean 33-17 and appeared to be in complete control.

During the second half Long Branch continued with its dominance and aggressive play. The end of the third quarter the Wave had an 18 point advantage over Ocean going into the final eight minutes up 45-27.

Ocean had its best quarter of the game at the end, but it was not enough as Long Branch won 56-44 and improved to 7-3 in division play, which is good enough for second place out of the eight teams. Overall Long Branch has a 10-5 record. Leading the Wave in scoring was Tyree Morris, a junior, who finished with 23 points.

The Spartans drop to 5-5 in the B North and are 11-5 overall. However, Ocean is now in fifth place in the division. Manasquan is at the top, following Long Branch is Red Bank Catholic and Middletown North in front of the Spartans.

Leading Ocean in scoring was Jack Miller with 14 points. Andrew Seager was close behind with 12, Darius Brown and Luke Yates each scored seven points in the loss.

Going up for a modified jump hook shot is Tim McMahon (24) of Ocean while Kevin Porch (4) of Long Branch attempts the block.