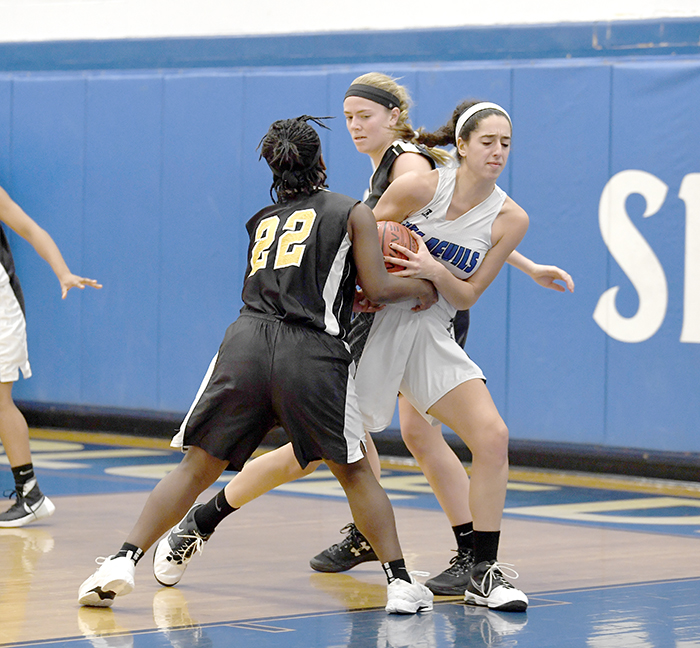 Allah transferred to Monmouth Regional this season from Neptune High School. Her ball handling, speed and shooting skills are definitely welcomed on the Falcons squad.

During the first quarter the Devils had a slight 8-6 lead on the Falcons. Allah, along with Marisa Santoro and Karley Trillhaase, had two points for Monmouth. Shore had two players hit three-point buckets; Breanna Jackson and Allie Reiser, who also made two foul shots.

The Falcons took control of the game in the second quarter where they outscored the Devils 16-7. Sabin was high girl with five points, Charlotte Gage had three and Madison Searight, Santoro, Trillhaase and Allah each had two points.

Shore had only one player make a basket in the second quarter and that was Jaclyn Shapiro. Emily Guo made two foul shots as did Reiser. Erin Rogers went one for two and Brittany Sawyer missed all four of her free throws. Going into the halftime break the Falcons were on top 22-15.

The first eight minutes of the second half was the worst quarter of the game for Shore Regional. Reiser made two foul shots for the only points in the third quarter for the Blue Devils. The Falcons scored eight points with Gage, Santoro, Trillhaase and Allah each getting two.

In the fourth quarter Shore Regional outscored Monmouth Regional just as they had to start the game. The final eight minutes the Devils scored seven points with Shapiro, Jackson, Guo each getting a basket and Reiser making one of two foul shots.

Monmouth Regional had only one player score in the fourth quarter. Allah scored six points, one basket and made four out of nine foul shots. She finished the game with 12 points. Sabin and Santoro each had six points.

The win improved the Falcons to 4-11 overall. They play in the B North division of the Shore Conference and are currently in seventh out of the eight teams with a 1-9 record.

Reiser led all Blue Devils with 10 points. The Blue Devils play in the A Central division of the Shore Conference are in sixth place out of the seven teams with a 1-7 record. Overall they are 5-12 on the seaso.