Walking Club for everyone 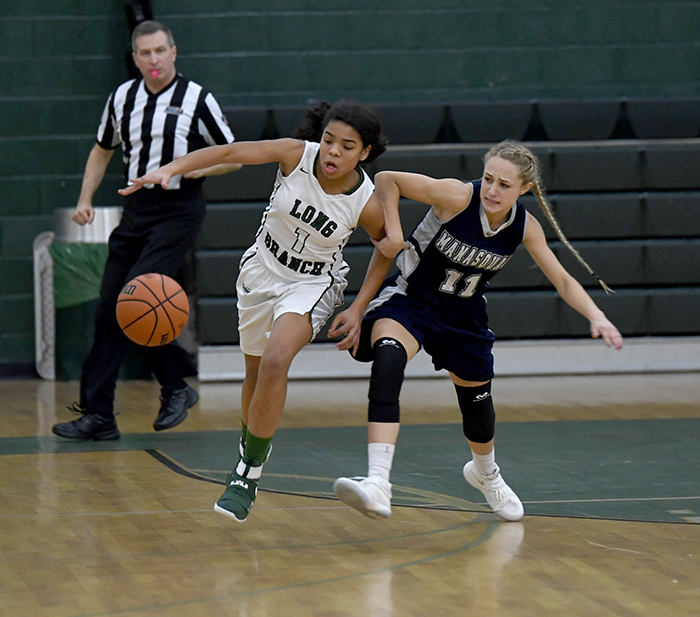 One of the best girls basketball teams in the state with one of the best players in New Jersey paid a visit to Long Branch High School on January 27, for a Class B North divisional game

The biggest buzz of the night was that Dara Mabrey of Manasquan needed only four points to reach that magical 1,000 career mark. Also in the stands were several college scouts, one from University of Louisville.

With 4:49 left in the first quarter Mabrey hit a jump shot giving her team a 6-5 edge over the Green Wave and getting her name secured in the record books at Squan with her 1,000 career point. The game was stopped and her family and teammates presented her with flowers and cards to a standing ovation by everyone in the gym.

When the first quarter ended the Green Wave was deadlocked at 15 with the undefeated Braves. “I’m very proud of how our players responded during that opening quarter,” said Shannon Coyle, head coach at Long Branch.

The Wave was missing Hydeinah Moore, one of its best players under the boards. It was just last week that she was honored with her 500th career rebound. However, the junior is no longer on the Green Wave squad, and the coach just wanted to talk about the players she has on the court. “Manasquan is one of the best teams in the state and we are playing them very tight, I just hope we have enough to keep up with them in the long run,” added Coyle.

Long Branch had a total of nine players while the top ranked visitors had 14 players. And near the end of the second quarter you could see that Squan was able to rotate players and keep the pace going fast. With only two minutes left in the first half Manasquan had a 27-24 lead on Long Branch. The Braves then went on an 11-0 run taking a 35-27 advantage into the halftime break.

That two minute run by Manasquan and their amount of players would eventually be the downfall for the Green Wave. During the third quarter Long Branch used what little gas they had left by outscoring Squan 17-13. However, the final eight minutes had the visitors adding 22 points to their total and only allowing Long Branch nine.

Stepping into a starting role for the Green Wave was Angelique Gathers, a junior. She has the ball handling skills of a guard and the size and strength of a forward. Gathers was also the high scorer for the Wave finishing with 24 points, eight rebounds, two assists and one block. Sol Margaret Navarro, the point guard for Long Branch finished with 13 points, hitting three consecutive three-point baskets in the second half. Quayniece Page also had a good game for the Wave scoring 10 points.

Under the boards for Long Branch was junior Keidy Mar Laureano, who had 10 rebounds. In her two years on varsity she now has pulled in 287 rebounds. Once she develops a more aggressive offensive profile she will be a force to deal with.

Now a member of the starting five for Long Branch is Angelique Gathers (15) a junior who scored 24 points and had 8 rebounds in the loss to Squan.

Driving the lane for Long Branch is Sol Margaret Navarro (11) a senior who scored 13 points in the loss to Manasquan.