Fairytale run over for lady Devils 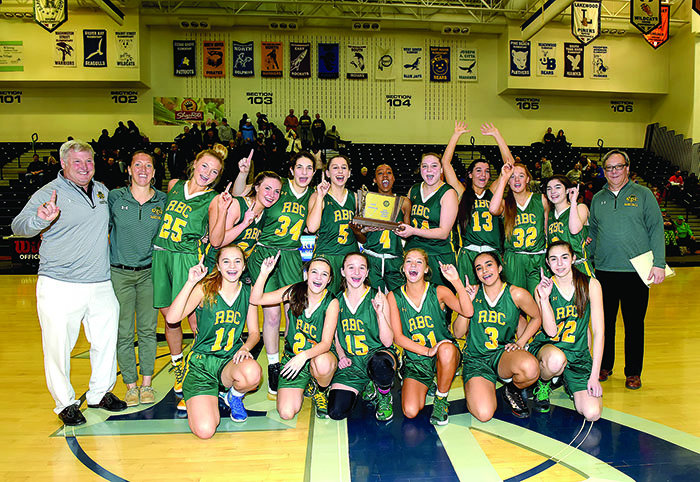 RBC (27-3), with one of its best teams ever, achieved a major goal Saturday when it won its 8th NJSIAA Non-Public A championship with a solid 55-41 win over Immaculate Heart Academy. It’s last championship was in 2013.

“My three senior starters, (Josie Larkins, Maureen Coakley and Tia Montagne) fought back from injuries and it hasn’t been easy, but they persevered,”said Montano.

“I don’t think it was our best game today,” he said. “It was a grind and a tough game, but IHA played very well. It’s the mark of a good team when you don’t play your best game and you still do what we did today. I thought that our kids a did a great job, especially in the second half.”

The win gives RBC the third seed in the Tournament of Champions, where it is scheduled to play Group I champion and sixth-seeded Bound Brook. The game was to have been played Tuesday but was postponed because of the blizzard.

Rutgers Prep, winners of 29 in a row, was top seed with Manasquan second. The Warriors earned the second seed because it beat RBC twice in the regular season, although only by a combined six points.

“We we were eliminated by St. John Vianney in the quarter finals the past three years,” said Larkins, who will be playing at the University of Vermont next season.

“We saw other teams win titles and we wanted to do it ourselves,” she said. “We’ve been at the other end the last three years and this was our last chance.

‘We trust each other and our coach believed in us,” Larkins said. “This was the first time that we believed it as much as he did.”

“We wanted to get to the TOC this year and go all the way,” said junior Katie Rice, who was high scorer with 18 points and seven rebounds. “Our juniors and seniors are all a year older and it needed to be done this year.”

RBC had a 31-23 halftime lead and extended it to 13 points on a trey by Rice and a basket by Larkin. IHA never got closer than nine points thereafter.

RBC reached the finals with a 64-48 win over Paul VI (Haddonfield) in the semifinals as Larkins set the pace with 22 points.

RBC led from the start and moved out to a 38-23 advantage in the third quarter before PVI made a run and closed the gap to 41-34 early in the final quarter, but RBC converted 20 of 24 free throws thereafter to preserve the victory.