Fairytale run over for lady Devils

‘Get Wired’ at SCAN Tech Fair 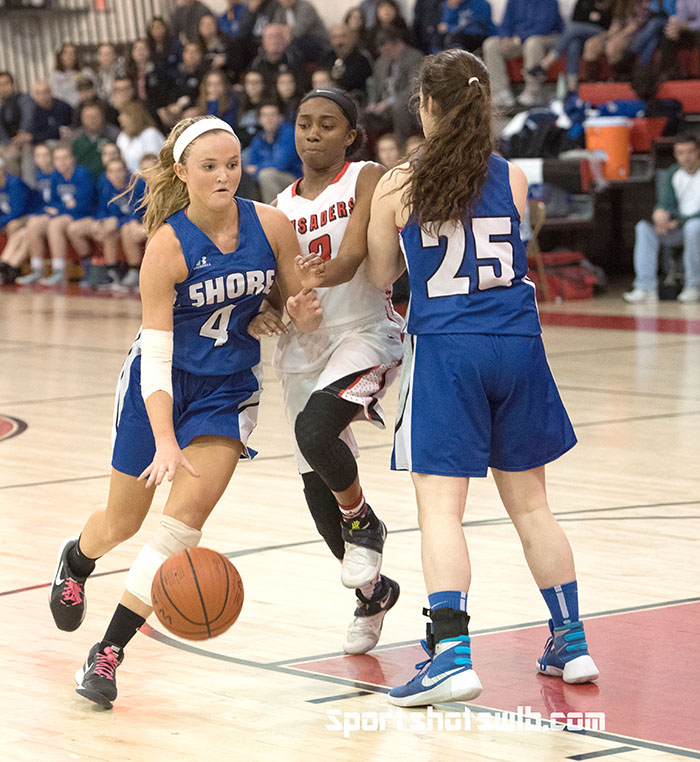 Last week the unbelievable run of the Shore Regional girls basketball team came to an end in the finals of the NJSIAA Central Jersey Group 1 tournament with a 73-33 loss to top seed Bound Brook.

Shore entered the 16-team tournament as the 14 seed and started off facing the third seed squad from Middlesex. That was an exciting game as the Blue Devils had to battle back from a weak first quarter where they only scored two points. In the end they beat Middlesex 38-35 with Allie Reiser leading the way with 12 points and Emily Guo getting 10.

In the quarterfinals Shore then faced sixth seed Dunellen. This time they had an easier time and won 49-24. All eleven players that made it into the game for the Devils scored, and it was spread out as not a single player scored 10 or more points. Breanna Jackson was top scorer with nine points while Jaclyn Shapiro had seven and four players; Caitlin Donegan, Erin Rogers, Guo and Reiser each ahd six points.

In the semifinals the Devils faced the number two seed Metuchen and continued their storybook ride through the playoffs with a 50-35 victory. Jackson had a strong game netting 17 points while Guo, Reiser and Shaprio each scored eight.

Bound Brook had a rather easy trip to the finals. They beat sixteen seed Manville 70-26 to open the tournament. In the quarterfinals they crushed ninth seed Point Beach 72-19, and then faced fifth seed Riverside in the semifinals beating them 69-23.

Shore entered the tournament with less than 10 wins on the season, while Bound Brook was 10-0 in their Skyland-Mountain division and in 28 games only had three losses.

Bround Brook was very impressive with tremendous shooting and an aggressive full court pressure. During the win over the Blue Devils they had two 18-0 runs. They outscored Shore 25-8 in the first quarter, 20-7 in the second, 15-10 in the third and the final quarter 13-8. It was the second consecutive NJSIAA sectional title

Resier led all Blue Devils with 11 points in the loss. Shapiro finished with six and Brittany Sawyer scored five. Shore ends the season with a 2-10 record in the Shore Conference A Central division and 10-20 overall