Art in the Park 2017 bigger and brighter than ever 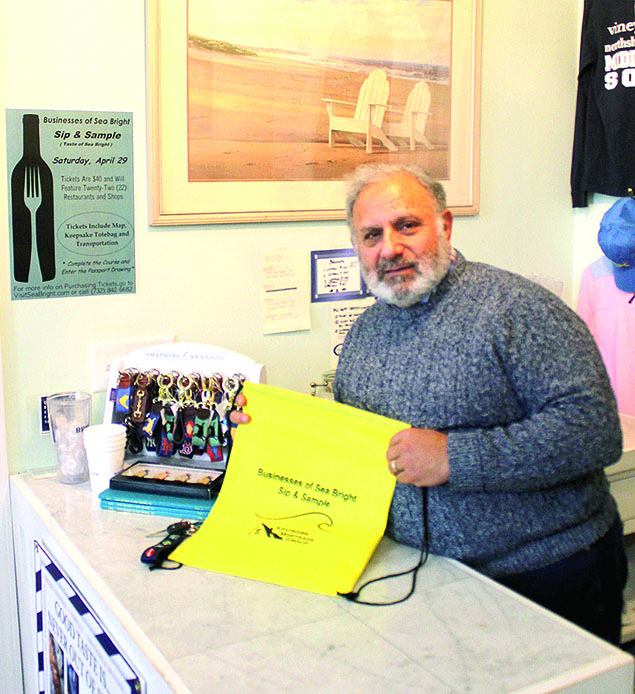 Brian George of Northshore Men’s & Women’s Wear, one of the participating businesses in in Sip & Sample, shows the tote bag and other items ticket purchasers receive. LINK News photo

By Neil Schulman
Sea Bright — Enjoy treats from some of your favorite restaurants, bars and stores, and see some of the new businesses and improvements as well, at the Sip & Sample: Taste of Sea Bright event on Saturday April 29.
Sip & Sample, put on by the Businesses of Sea Bright, will feature 23 merchants, restaurants, and retailers. 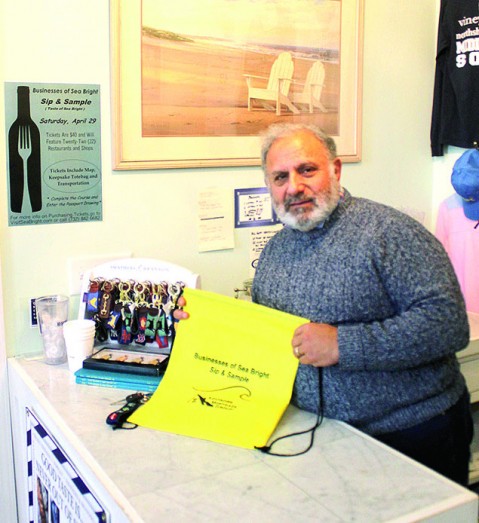 Brian George of Northshore Men’s & Women’s Wear, one of the participating businesses in in Sip & Sample, shows the tote bag and other items ticket purchasers receive. LINK News photo

All afternoon, participants will be able to visit each of them – with free bus transportation provided to help get around Sea Bright – getting samplings of food, drinks, cocktails and free giveaways. They’ll also have a chance to win prizes, including a $300 giveaway.

Brian George, owner of Northshore Men’s & Women’s Wear in Sea Bright, says that this promotion is a way to make people aware of what Sea Bright has to offer just before the summer season begins — and show those that hadn’t heard it’s more than bounced back after the damage Superstorm Sandy caused five years ago.

“It brings in people who maybe haven’t visited Sea Bright for a while,” George said. And it draws attention to the many great attractions to the west of the sand. “We’re more than just a beach – we’re businesses.”

At each of the participating businesses, people will have an opportunity to taste a sample of signature dishes, sip a special drink, or pick up free merchandise.

At each stop, you get your passport stamped; anyone who completes the tour is eligible to be entered into a drawing, with prizes of $100, $200 and $300 in “sand dollars,” to be spent at Sea Bright  businesses.
Five buses (sponsored by the borough) will be running continuously until 6:30 p.m. to transport people to the stops on the north and south ends of Sea Bright and back to the center.

Growing businesses
While it’s the first time Sip & Sample has been held in several years, this is not a new event.
“Last time we did it, it was a lot of fun.”
Of course, for a few years after the storm businesses were rebuilding, but the Sea Bright business community is back and growing. And as a shore destination, it’s know for its many places to eat, and its taverns and entertainment.

But while there are many bars, restaurants, and other eateries, there’s more to that, including new businesses that have recently opened or are coming to the borough.

That includes Wildflower Hair Studio, which had its grand opening ceremony last week; and the Lucky Dog Surf Shop scheduled to open soon.

There are also fashion destinations like Nova Boutique and George’s own business, North­shore, which has been providing clothing for over 30 years, attracting clientele around the area who come from as far away as Colts Neck.

Events like Sip & Sample are a chance to people experience what the Businesses of Sea Bright have to offer.

Information on Sip & Sample are available at the Businesses of Sea Bright website, www.visitseabright.com, under the “Sip & Sample” link.