Three options, all with some issues, for new schools

Chicken ordinance pros and cons flutter around, some cry fowl

A lifetime in entertainment and dining comes together 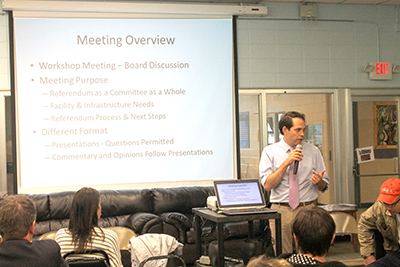 Board of Education member Cullin Wible discusses the options for a referendum at a special workshop meeting.

By Neil Schulman Oceanport — The Oceanport Board of Education looked at eight options for replacing or renovating its school buildings last week, and left with three, one of which wasn’t listed as a choice.

Board of Education member Cullin Wible discusses the options for a referendum at a special workshop meeting.

After a special May 10 Board of Education meeting to discuss a potential referendum, the board narrowed the options down to 1) replacing the Wolf Hill School building, parts of which are more than a century old, with a new structure and making some comparatively minor changes to Maple Place School; 2) Purchasing new land on Fort Monmouth, near the planned Oceanport municipal complex, and building a new school for pre-kindergarten to eighth grade; 3) acquiring the former CommVault building and converting it into a new school for students.

The first two options would both have price tags of roughly $30 million. Not enough work has been done on the third option to have a price estimate.

Business Administrator Dr. Joan Saylor prepared a very rough estimate of what the project might cost taxpayers. Based on current assessments, and assuming a 20-year bond with 4 percent interest, a $10 million referendum would cost the average Oceanport resident (whose house is assessed at $447,000) $236 a year . A $25 million referendum would cost $579 a year. She emphasized those were “first glance” figures, not final calculations, which would need more data.

“This is only potential, and this is only estimates,” she said.      Residents at the meeting said that price and effect on taxes was going to be a factor in whether they supported a referendum.

“I said (at a board meeting) in January I was going to bring in a hat and pass it around so I could pay my taxes,” said resident Therese Falcone.  Issues with builds

Board member Natalie Papailiou said that the board’s ad hoc committee in charge of evaluating proposals was “interested in solutions that do not involve relocating students.”

While renovations at Maple Place School are relatively minor — adding some new STEM (science, technology, engineering and math) labs for modern education techniques and a few other changes — Wolf Hill work is more extensive, and several of the options reviewed would require finding a new location for the 335 students who attend.

Superintendent Thomas Ferrell, who also serves as the Superintendent of the West Long Branch Schools, says that if the students were temporarily sent to another district, they’d have to be broken up. West Long Branch, Eatontown, and other local elementary schools just couldn’t accommodate that many.

Board member Michele McMullen said that school representatives met with the owners and brokers for the former CommVault property to see if that property could be used for relocating the students, and they seemed “quite amenable to working with us.”

There is space in the building to accommodate all the students, and the property includes fields which would be good for outdoor activities.

“It would fit our needs perfectly,” she said. But she added that it would add a lot to the referendum costs if students were relocated there as a new building was put up, since the price “is more than $1 million a year.”

Bill Pappalardo of JBA Architecture said that early in the planning process he had reviewed the possibility of making a three-story, K-8 building on the Wolf Hill School property, but rejected it because it would be impossible to fit athletic fields there. He also noted that Maple Place School can’t be expanded too much due to the amount of wet lands on the property that keep it from being developed.

Any attempts to keep most of Wolf Hill would have required significant renovations, as it no longer meets modern standards. Cafeterias are no longer located in basements, and the many stairs and other issues mean it is not compliant with the Americans With Disabilities Act.

Having all K-8 students in a single building could result in some cost savings in the long run. For example, only one school nurse would be needed.     FMERA, the agency that controls development of the former Fort Monmouth property, offered two possible locations. The board rejected one as too difficult to procure; part of it is in Eatontown and would require complex legal procedures to move within Oceanport’s borders.

The other one also has concerns. Perhaps the biggest is that FMERA will not let the board negotiate directly for the property. It would need to go out for a bid – and properties zoned for school use have proven popular elsewhere, which means it might be difficult to obtain.

And in a Catch-22 situation, the board cannot hold a referendum asking to build the school there until it has secured the land, but cannot get money to secure the land without holding a referendum to get the bonding in place.

Since it was only a workshop meeting, no formal action was taken. More discussion is expected at the May 24 board meeting. If they decide to go forward with a referendum, it won’t be on the ballot until November or December at the earliest.