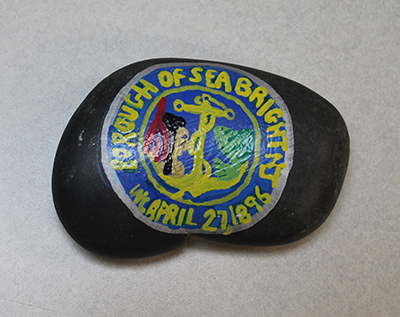 A Rock For Kindness decorated with the Sea Bright insignia.

By Neil Schulman
Sea Bright — As children around the borough enjoy an activity with small rocks, residents are being asked to stay away from some of the bigger ones.
Two of the topics discussed at Tuesday’s Sea Bright Borough Council meeting were the new Rocks for Kindness program, and the construction of the sea wall.

A Rock For Kindness decorated with the Sea Bright insignia.

“We remind residents to stay away from the work areas,” he said. Those who take their pets for walks are asked to stick to other beaches while work is taking place.

Lamia said it’s a large safety hazard to be on these rocks — but it appears very tempting to many.

“People are climbing over the rocks, and the more we talk about it, the more they want to go see the rocks. It’s a two-edged sword.”
Lamia also said some of them had been formed into a temporary jetty, which also attracted people.
Council President William “Jack” Keeler said that this could pose a liability issue if people aren’t warned. One of Sea Bright’s neighbors dealt with that a few years ago.
“In Monmouth Beach, somebody decided to hop, skip and jump over the rocks. They took a tumble and were pretty badly hurt,” he said. There was a suit, and the rocks were declared an “attractive nuisance,” leading to liability issues.

Rocks for Kindness
On the other end of the size scale or the Rocks For Kindness that have been scattered throughout Sea Bright. These decorated rocks fit in your hand — and people are encouraged to look for them and pick them up.

“People are painting rocks, hiding them in town,” said Councilman Marc Leckstein. There are numerous designs, including one rock for each business in Sea Bright.

The idea behind the Kindness Rock project is to inspire others through randomly placed rocks.

“The kids love it,” Leckstein said. “They find the rocks; they’re putting it on Facebook.”

Leckstein also reminded people of another kid-friendly activity coming up: Trunk Or Treat will be held Oct. 28 in the municipal lot. People come in costumes, and put candy in the trunk of their cars for the kids to take.
There will also be a parade and refreshments will follow at the Sea Bright United Methodist Church.