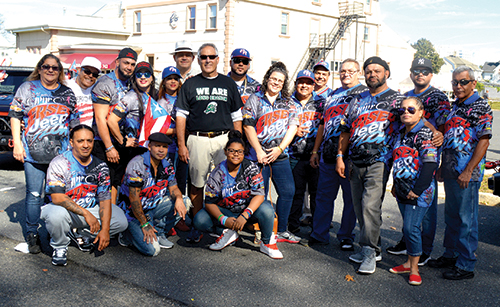 Organizer David Perez (rear, second from left) and Mayor Adam Schneider (black t-shirt) with the Jersey Jeep Organization that showed up with supplies and to show support.

By Patty Booth O’Neill
Long Branch – On Sunday the Long Branch Puerto Rican community held a fundraiser for victims of Hurricane Maria that devastated the island in September. The event was held outside at the Elks Club on Garfield Ave.

Organizer David Perez (rear, second from left) and Mayor Adam Schneider (black t-shirt) with the Jersey Jeep Organization that showed up with supplies and to show support.

Perez and Mayor Adam Schneider combined resources and withen two weeks and attending meetings each worked on what they could to bring the fundraiser together.

“The event was for everyone, not just the Puerto Rican community,” Perez said.

The Jersey Jeep Organization showed up with sirens blasting,  bringing goods and as a show of support. There was music playing, food being sold and a central spot where donations could be dropped off.

“There’s a tremendous need of supplies,” Schneider said. “It’s hard getting things on and off the island, but we can ship clean water, personal hygiene items and cleaning supplies.”

As the day progressed, a steady stream of people arrived carrying water, and other supplies in dire need on the island.

The city is storing donated goods at the OEM building and they will be shipped from there by an organization. The city is not involved with the shipping. “We would like these supplies to go directly to Puerto Rico,” Schneider said. Most organizations can’t promise that. “They say that supplies go where they are needed.”

The relief fund, a non-profit, charitable entity with a 501c3 pending, is a one-stop source for people to donate directly to island-based charities. The fund is transparent and focused on delivering immediate, targeted aid.

To learn more about the relief fund, as well as the board members involved, visit nj4pr.org. Donations are now being accepted through the site. Supporters can also call 1-833-NJ-HELPS.

Many people at the event have family members in Puerto Rico still trying to recover from the aftermath the hurricane.

“I have family there,” said Perez. “This is the first of many events. Puerto Rico has a long way to go to recover.”