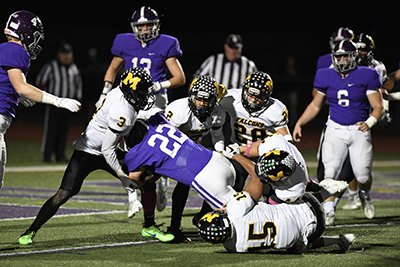 On Friday night a total of 73 points were scored in the football game held at Rumson-Fair Haven High School. The host Bulldogs scored 48 of those while the visiting Falcons of Monmouth Regional had the other 25 points. Both teams play in the A Central division of the Shore Conference and both had only one loss going into the game.

It was a record book game for RFH senior running back Peter Lucas, who had 24 carries going 299 yards and scoring five touchdowns. He and his fellow Bulldogs racked up 404-rushing yards on 37 carries. In the air Dan Harby completed 9 of 12 passes for 93 yards.

Monmouth Regional had a horrible start to the game. First offensive play had the ball snapped over the head of the quarterback for a loss of nine yards. On the next play they had the ball taken out of their running back’s hands and recovered by Rumson-Fair Haven on the Falcons 19-yard line.
That is when Lucas ran 19 yards for his first touchdown of the game. The extra point by James Hempstead was good and bang the Bulldogs were up 7-0.

However, the Falcons had a big play of their own on their next possession. Ian Fitzgerald broke away for a 79-yard touchdown run. Devon Johnson kicked the extra point and the game was tied at seven.

Rumson-Fair Haven handed the ball to Lucas who chewed up turf and time on the clock. With 4:48 left in the first quarter he ran in from one yard out giving the Bulldogs a 14-7 lead after the Hempstead kick.

In the second quarter the Bulldogs only scored one touchdown. It was a 14-yard run by Alex Maldjian and with the Hempstead kick the lead was now 21-7.

With 1:20 left in the first half and a fourth and one at the Monmouth Regional 34, the Falcons defense held and the ball went over on downs. On the next play Elijah McAllister of Rumson-Fair Haven had a huge sack on Ryan Convery for a Monmouth Regional 14-yard loss.

With 16 seconds left in the half, Convery found Khalil Walker open for a 22-yard reception and first down at the Bulldogs 25-yard line. With no time on the clock Johnson nailed a 44-yard field goal and the Falcons went into the halftime down 21-10.

Start of the second half the Bulldogs had a simple game plan, hand the ball to Lucas. He ripped off a 44-yard run to start the third quarter going to the Falcons 23. With a fourth and two at the Falcons four-yard line Lucas ran in for his third touchdown. After Hempstead made the kick the lead was now 28-10 with 6:58 left in the third quarter.

Monmouth Regional then attempted a trick play, double reverse at their own 30 and the result was a fumble which Christian Lanzalotto of RFH recovered. And a few plays later Lucas ran in for his fourth touchdown. Hempstead was perfect on the kick and the Bulldogs were up 35-10 with 4:42 left in the third quarter.

Monmouth Regional had a 19-yard touchdown pass play from Convery to Johnson with 10.7 left in the third. Johnson made the extra point kick and the Falcons went into the final quarter down 35-17.

Starting the fourth quarter Lucas ran 91 yards for his last touchdown of the game. He ran over, around and bounced off Falcon defenders all night. The extra point kick missed, but the Bulldogs were out in front 41-17 with 11:32 to play.

The last Monmouth Regional touchdown of the game was an eight-yard pass play from Convery to Johnson. The two also teamed up for the two point conversion. Rumson-Fair Haven was up 41-25.

The Bulldogs had one last touchdown in them and that was an 11-yard run by Alex Maldjian and the Hempstead kick made the final score 48-25. Rumson-Fair Haven improved to 6-1 overall and 5-1 in the A Central with their only loss to St. John Vianney in overtime.