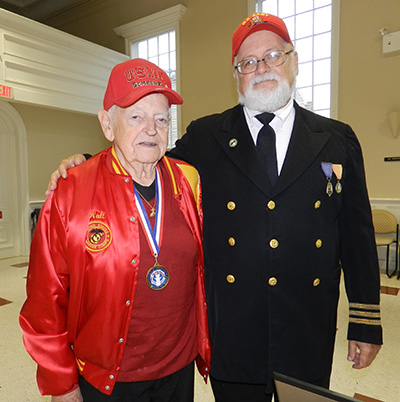 Rich Chiemingo with Eatontown veteran Walter Biernacki. Biernacki is wearing a special medal he got from the government of Saipan for his efforts there during the war.

By Coleen Burnett
Eatontown — The Eatontown Historical Museum held its fifth annual event to honor veterans on November 5.
To mark the occasion, the lawn in front of the museum was festooned with flags dedicated in the memory of a veteran or an active duty service member. The first year featured fifty flags.

Rich Chiemingo with Eatontown veteran Walter Biernacki. Biernacki is wearing a special medal he got from the government of Saipan for his efforts there during the war.

This year, there were 220 flags featured — 15 of which were dedicated to those from Eatontown who lost their lives in combat.

There was special attention paid this year to the 100th anniversary of the United States’ entry into World War I.
“Your presence here today is a tribute to those who served and their families,” said Museum President Phyllis Trask.

After the ceremony, many trouped across the street to the Senior Center to see the World War I “Sousa Musical Tribute” led by Rich Chiemingo, one of the leading John Phillip Sousa re-enactors in the country.

Perhaps Sousa’s most famous composition is “The Stars and Stripes Forever.” Another famous piece he wrote was called “The Liberty Bell,” though we know it better today as the theme from “Monty Python’s Flying Circus.”
“In high school I started to play the sousaphone, and he became a hero of mine”, Chiemingo told the Link. “I admired his morality and patriotism.”

He pulled out a well-worn clipping. “I’ve had a picture of him in my wallet since 1963.”
Chiemingo has portrayed the bandleader “hundreds of times” in 16 years and it never gets old. He loves to watch the reactions on people’s faces.

“He wanted to write music that made you proud to be a great American.”