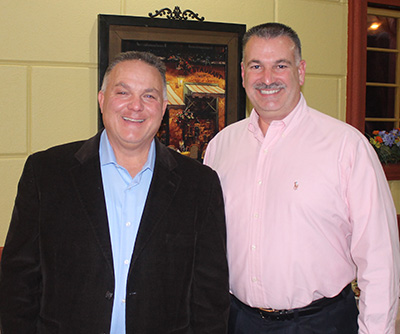 As the West Long Branch Republicans gathered to tally up the results, it soon became clear that the vote was easily going their way.

“Jeremy Strauser did a Facebook campaign,” Migliaccio said in his remarks on Election Night. He said that his opponent was less involved in the community than the incumbents. “He never coached a team, joined the First Aid Squad, or given any of his time.”

But Migliaccio did say that it was a clean campaign on both sides. Strauser’s concerns – empty stores and speeding on some streets – are legitimate, but unfortunately either beyond the council’s control or have no good solutions.

Speeding on Hollywood Avenue is a concern, but suggestions like speed bumps or calming stripes wind up upsetting the neighborhood because of all the noise cars make when going over them. Council has explored those options in the past, he said.

“We’ve been there already.”
Migliaccio said he and Neyhart were returned to office for another term based on their accomplishments.

“The voters, they know what we do,” he said. “We do it effectively. We get things done.”
He added that while there have been many good governing bodies in West Long Branch over the years, he believes the last two years have been some of the best in borough history.

“I just want to thank you guys for supporting us,” Migliaccio said. “We just do what we can to help out in the borough.”

Neyhart agreed that the current council is running well.

“We try to accomplish as much as we can, all of us.”
Neyhart said that he almost didn’t seek another term, but his family and fellow council members urged him to help.

“Without the support of everybody here, it wouldn’t be the same town,” he said. He quoted mayor Tucci’s often-said remark that they aimed to keep West Long Branch “a great place to raise a family.”
On the West Long Branch Residents Facebook Page, Strauser thanked everyone for their support.

“Congratulations to Council Members Neyhart and Migliaccio on their re-election. They are both fine people who will serve the Borough well,” he wrote.

“It was an honor to be considered and to run. Thank you to all who supported my campaign and voted today. It was great getting to know more of you and learning more about your priorities as fellow residents.
“Our small town faces big challenges, and I know that working together, we can face them head on and succeed.”