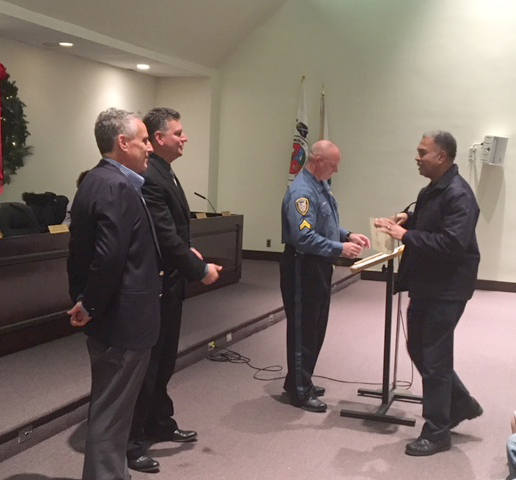 Four more classes followed, with a graduation ceremony for the most recent one, the fifth Citizens Police Academy, being celebrated at the City Council meeting on Monday, Dec. 11.

“We’ve had more than 180 take part in the academy,” said Cpl. Joseph Graziano of the Long Branch Police Department, who has run the classes with Cpl. Kim Leavy since they started.

The most recent academy started in October, and the people who took the classes learned how the police handle everything from traffic stops to gangs and drug issues to homicide investigations. They met with police and city officials, learned about security measures in schools, and learned about the department organizations.

But the biggest purpose of the academy, Graziano said, is to let people meet the police, and let the police learn about the citizens of Long Branch.

“The program was designed so that residents of Long Branch could learn more of what the Long Branch Police Department has to offer and how it operates.

“Its main goal is to further enhance and strengthen the city’s relationship with the community,” Graziano said.

He added that they “could not be more proud of these civic minded participants who have volunteered over two hours of their time every Tuesday for eight weeks.”

The program, he said, would not have been possible without support from the city and the higher-ups in the Long Branch Police Department.

Following Graziano’s remarks, the graduates of the class who were able to attend received diplomas and praise from Mayor Adam Schneider,  Acting Chief Jason Roebuck and Graziano.