Theater Review: Powerful, suspenseful crisis of faith in The Calling at NJ Rep

Locals lash out at idea of drilling off Jersey shore 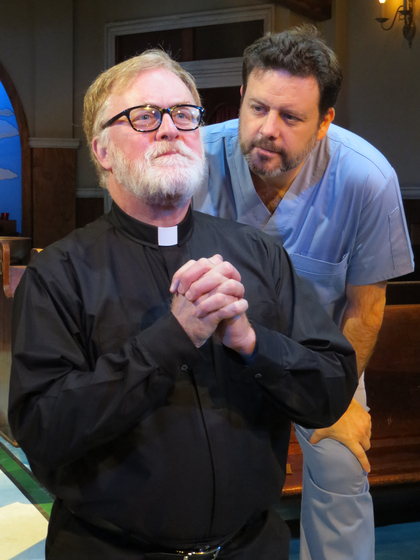 Long Branch — “Ah, look at all the lonely people.”

I could not resist opening with a quote from Eleanor Rigby after viewing Joel Stone’s powerful play, The Calling, having its world premiere at NJ Rep, 179 Broadway, because The Calling is a two character play about a priest and a troubled visitor.

However, Father Dan (Ames Anderson) and Carl (Jared Michael Delaney) are not Eleanor Rigby and Father McKenzie. The two are not explicitly lonely, but Carl is burnt out from his years as a nurse, most recently in the Intensive Care Unit.

Jessica’s Parks’ setting is a wonderfully realistic church, with eight real pews facing the audience so that its point of view is the altar (which is especially effective when Father Dan kneels in prayer).

Father Dan is picking up debris from Mrs. Callahan’s funeral. He finds tissues. He finds a Santa hat. Finally, he finds Carl, sleeping on a bench (hidden from the audience so we are as surprised as Father Dan). First Father Dan thinks Carl is homeless, and then he mistakes him for a would-be thief, but when he finds that Carl attended the funeral to pay last respects to his late patient, the priest invites the nurse to stay and talk for a while.

That is a bad idea, but without that decision, there would be no play.

Soon, the men are arguing about several basic philosophical questions. Why do good people suffer? Does God have a master plan? Do we treat our pets with more humanity than we treat our elderly?

Father Dan seems firm in absolute certainty of his faith. He worries that Carl is tempting eternal damnation by contemplating suicide, and assures Carl that his troubles will be lifted by trust in Christ.

Carl is a “sort of lapsed Catholic,” and argues to the point where Father Dan accuses him of playing mind games, and deliberately pushing the priest’s buttons.

There are moments of levity, especially a great argument about whether there are as many as five explicitly Christian top 40 hits (Carl is willing to concede White Christmas but not Rudolph the Red-nosed Reindeer), which leads to a lovely sing-along. But the mood darkens and there are disturbing revelations and actions.

Ames Anderson is wonderful as Father Dan, coping with asthma, bad knees, and an increasingly unsettling visitor. Jared Michael Delaney, as the ambiguous Angel of Mercy, will make you feel many strong emotions.

The Calling raises many questions and leaves us to ponder the answers.