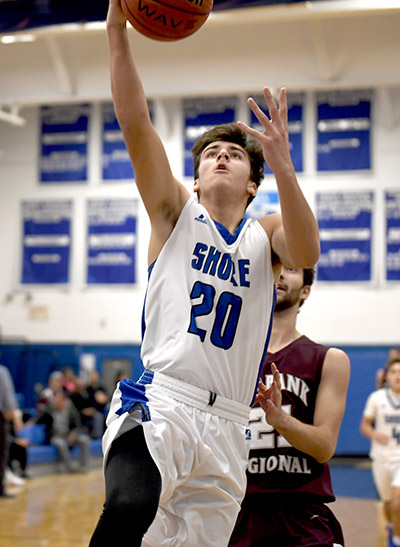 Chris Panduri (20) of Shore Regional goes up for two of his game-high 23 points in the win over Red Bank Regional.

Last week the Bucs of Red Bank Regional were in West Long Branch to play the Blue Devils of Shore Regional in a Class A Central basketball game. Shore took the 52-46 victory and improved to 3-3 in the division and 5-5 overall.

Shore looked like a well-oiled machine as they ran the floor with speed and accuracy in passing, hitting the boards and playing aggressive defense. Shore opened the game taking a 12-9 first-quarter advantage over Red Bank Regional. Only three Devils scored in that opening quarter; Chris Panduri scored seven of his game-high 23, Kyle Koob had three and Ryan Paglia had two.

In the second quarter both teams were dead even with 10 points each. Koob had five, Panduri scored three and Ryan Flanagan put in two points for the Devils, who took a 22-19 lead into the halftime break.

Red Bank Regional had five players scoring in the first quarter. Brian Forsman, Jack Niesz, Dean Hoffman and Matt Weidman each had two points, and Gavin Mahoney made one of two foul shots. In the second quarter, Forsman had five, Jasir Thomas scored three and Weidman made two foul shots.

n the third quarter the Blue Devils added 14 points to their total which solidified their victory. Panduri had six points, Paglia and DuBois each hit three-point baskets and Devin Chartier had two points.

Panduri, who was high man for the Devils with those 23 points, finished the game as he started with seven fourth-quarter points. Koob had six of his-game high 17 in the fourth.

Matt Weidman led the Bus with 14 points while his teammate Forsman scored 13.

Chris Panduri (20) of Shore Regional goes up for two of his game-high 23 points in the win over Red Bank Regional.