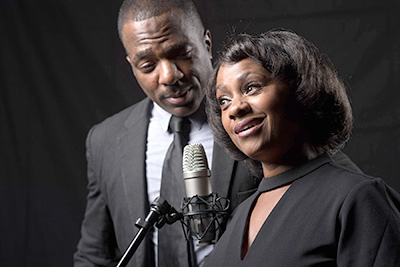 WEST LONG BRANCH – This year marks the 50th anniversary of the death of Martin Luther King Jr., even as the struggle to resolve racial tension remains a challenge for communities everywhere.

L.A. Theatre Works commemorates the anniversary with a touring production of the internationally acclaimed play, The Mountaintop, written by Katori Hall, directed by multiple award-winner Shirley Jo Finney and starring Gilbert Glenn Brown (CBS TV’s The Inspectors, upcoming feature film The Best of Enemies) and Karen Malina White (The Cosby Show, A Different World, Malcolm and Eddie). The production will travel Monmouth University’s Center for the Arts on February 8th as one of the 38 locations across the United States.

Going up at 7:30 p.m. inside the Pollak Theatre, the performance represents a one-night-only debut for the play that won the Olivier Award as Best New Play in 2010, and that arrived in New York the following year in a production that starred Samuel L. Jackson and Angela Bassett. The event also marks the welcome return of L.A. Theatre Works, the celebrated “radio theater company” whose regular visits to the Monmouth campus have included their adaptation of the hard-hitting drama In the Heat of the Night. For their latest touring production, the troupe under the leadership of Producing Director Susan Albert Loewenberg returns to the angry streets of the 1960s American South — or more specifically, Room 306 at the Lorraine Motel in Memphis, Tennessee, on whose balcony Dr. King was fatally shot on April 4, 1968.

It’s there that the civil rights leader — just hours after proclaiming “I’ve been to the mountaintop” in what will turn out to have been his last speech — passes the final night of his life in the company of a hotel maid by the name of Camae. Over the course of that night, the larger-than-life figure from history and the working-class witness engage in a dialogue that’s laced with humor, humanity, and some surprising takes on the high-profile people and issues of their day.

Extrapolating from the existing details of King’s last hours, playwright Hall conjures an encounter that has been hailed as “breathtaking, hilarious, and heart-stopping in its exchanges.” As the 50th anniversary of MLK’s assassination draws near — and contemporary headlines serve to remind us that there is much work to be done in fulfilling the slain leader’s vision — the fictionalized play paints a portrait of the real man behind the statues, memorials, and federal holiday.

Award winning stage-screen actress and director Shirley Jo Finney helms the touring production, which in the L.A. Theatre Works tradition is presented in the style of a classic radio drama, albeit one that carries an advisory of “mature language.” A cast of professional actors performs minus elaborate scenic design or costumes, with the addition of sound effects further serving to capture the energy of the LATW radio broadcasts, heard regularly on public radio stations as well as the BBC, CBC, and live streamed performances at www.latw.org.

Tickets for the LA Theatre Works presentation of The Mountaintop are priced at $35 and $45, and can be reserved through the Monmouth University Performing Arts Box Office at 732-263-6889, or online at www.monmouth.edu/MCA. Tickets for other upcoming events at Monmouth University’s Pollak Theatre, including a new series of high definition broadcasts from the National Theatre of London, are on sale now.