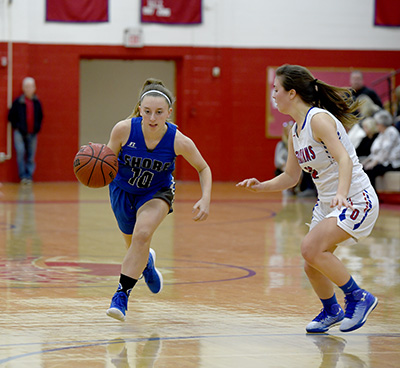 Saturday night was a doubleheader of basketball at Ocean Township High School. The first game had the Lady Spartans hosting the Blue Devils of Shore Regional. It was an exciting game as both teams were playing hard, but the Devils came away with the 35-26 victory.

Shore started off fast taking a 7-2 lead in the first quarter. Savannah Notte had four of those Blue Devil points. Jaclyn Shapiro, who normally is a rebounder and looks to assist her teammates, hit three out of four foul shots. The only basket for Ocean was scored by Morgan Bartlett.

In the second quarter the Spartans played more to their tempo. They slowed the game down and outscored the Devils 7-6. Bette Brady and Alex Ardizzone each had three points while Bartlett made one of two foul shots.

For the Blue Devils only two players found the rim in the second quarter. Madison LaRosa and Shapiro each hit a 3-point bucket. Going into the halftime break Shore had a 13-9 lead.

Ocean played their best basketball in the second half. They outscored Shore 8-4 in the third quarter. At one point in the game it was deadlocked at 17. Then the Spartans made some critical errors and committed a game-high 25 turnovers.

Shore Regional took advantage of a lot of those turnovers in the fourth quarter and outscored Ocean 18-9 taking the win. Notte was high scorer for the Devils with 10 points and had four steals. LaRosa finished with e

Bartlett was high for the Spartans with 10 points, seven rebounds, five steals, one block and one assist. Bradley finished with nine points and five rebounds for Ocean.

Both schools are struggling this season. Shore which plays in the A Central division of the Shore Conference are 5-8 overall after the win. In the division they are 0-7 and in last place out of the seven teams.

Ocean is in the B North division. The Spartans drop to 2-11 overall after losing to the Blue Devils. They are also winless in their division, 0-9, and in eighth place out of eight teams.

Morgan Bartlett (23) left and Alex Ardizzone (35) right attempt to stop Jaclyn Shapiro (13) from getting a basket.

Making a great move alone the baseline for Ocean Township is Bette Bradley (22).

One of the ball handlers for the Blue Devils of Shore Regional is Sydney Sears (10).