Plans for Mon. Park aim to increase field size in 2018 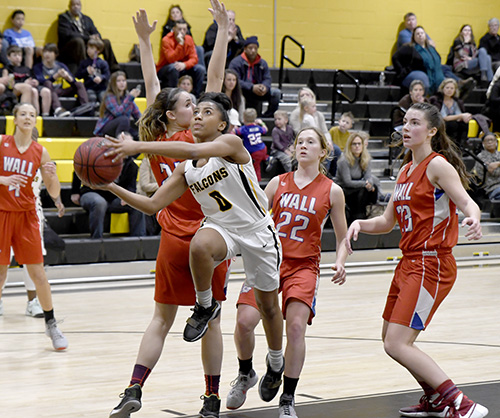 Last Thursday the Scarlet Knights of Wall Township were in Tinton Falls as the Lady Falcons of Monmouth Regional hosted them in a Shore Conference B North divisional basketball game.

Wall started off red hot against the Falcons as they took a 12-3 first quarter lead. Monmouth Regional just couldn’t get in sync in that opening quarter. Destiny Bland was the only Flacon to find the rim, and it was a 3-point bucket.

Laura Forbs, who is in her rookie season as the Falcons head coach is very familiar with the school. She was an all-star player for Monmouth Regional who went on to play at Monmouth University. After graduation from college Forbs had a job as director of basketball operations for the Hawks. Her knowledge of the game and ability to relate to players is obvious. She is constantly encouraging, correcting and helping her players. And it is with humor, and a smile, and yes, sometimes a stern look and voice.

She was able to get her team to settle down and follow her game plan in the second quarter. When the buzzer sounded for the end of the first half the Falcons were only down four points, 26-22 to Wall.

Marisa Santoro hit two 3-point buckets and had a basket for eight of her game-high 12in that second quarter. Precious Allah had two baskets and one 3-pointer for seven of her game-high 10 points while Charlotte Gage scored four points for the Falcons. I

n the third quarter Wall made some adjustments, while Monmouth Regional players seemed to be rushing and pushing the ball, or taking ill-advised shots. Going into the final quarter of play the Knights had opened up a 40-30 advantage over the Flacons. That sense of urgency that Monmouth Regional had in the third quarter only escalated in the fourth, and the mistakes were capitalized by Wall who eventually won the game 50-39. “We have come a long way, and still have more work that needs to be done,” said Forbs.

The B North has eight teams, with the top two ranked in the state and nation; Manasquan is 11-1 and 7-0 in the division while Red Bank Catholic is 10-3 overall and 7-1 in B North. After those two squads the division is very competitive as Middletown North and South are both 4-3. Wall is 4-4, Monmouth Regional is 3-5, Long Branch has a 2-6 record and Ocean is winless in the B North at 0-9.