To endorse or not endorse 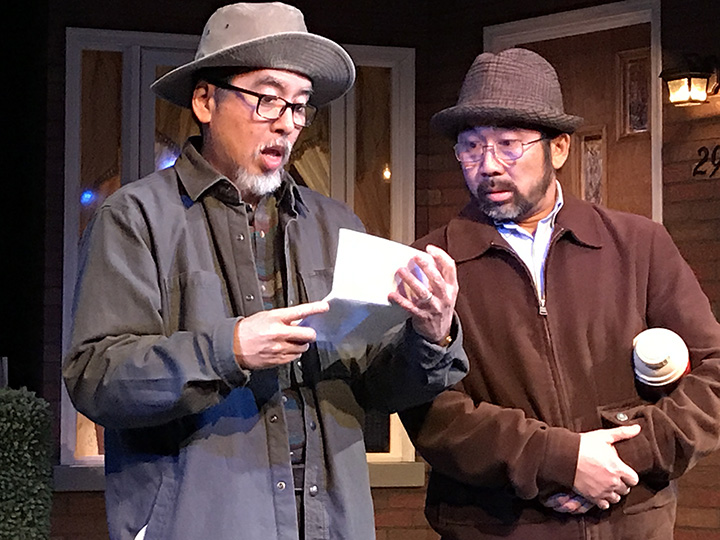 Stan Egi and Fenton Li in a scene from the world premiere of Issei, He Say or the Myth of the First by Chloé Hung. (SuzAnne Barabas Photo)

Long Branch — The world premiere of Issei, He Say (Or the Myth of the First), by Chloe Hung, is playing at NJ Rep. Here is a spontaneous three word review by my husband, Joel Schulman. “That was marvelous!” Joel felt this very strongly. I would go with “warm and human,” but “marvelous” works. 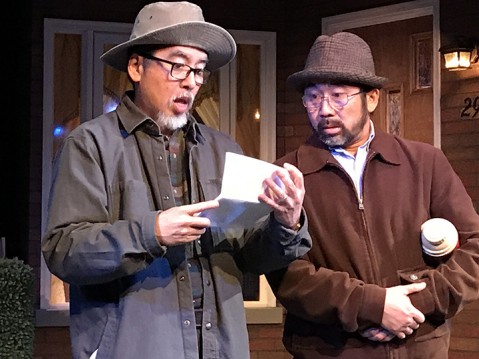 Stan Egi and Fenton Li in a scene from the world premiere of Issei, He Say or the Myth of the First by Chloé Hung. (SuzAnne Barabas Photo)

Two houses sit side by side in a working class neighborhood in Scarborough (Toronto), Canada. The year is 1969. The Chu family lives at number 29. Mr. Chu (Fenton Li), has brought his wife (Kathleen Kwan) and 12-year-old daughter Lucy (Christina Liang) from Hong Kong to pursue the North American dream.

Mr. Yamamoto (Stan Egi) lives at number 28. He is first generation Japanese American (Issei), a former fisherman from Vancouver now working as a gardener. Jessica Parks has designed a lovely little garden for him, contrasting with the neighbors’ barren yard.

Mr. Yamamoto calls out a friendly, “Good day, neighbor!” every morning as Mr. Chu goes grumpily off to work, but never gets a friendly response. Mr. Chu hates all Japanese because of atrocities committed by the Japanese against the Chinese during World War II, and holds Mr. Yamamoto guilty by association, even though Mr. Yamamoto was in Canada during the war, shamefully incarcerated in an internment camp. (I did not know that the Canadians were also guilty of imprisoning their Japanese citizens.)

Lucy loves her neighbor, who gives her orange cream soda and listens to her tales of the terrible way the white girls at school treat her. Poor Lucy! Canadian culture is so foreign to her that the only Canadian parties she can name are “Birthday, Christmas, Easter.” He can sympathize as one Issei to another with a newcomer trying to fit in.

Mrs. Chu has to endure patronizing white ladies laughing at her accent. Kathleen Kwan is charming when Mrs. Chu, practicing her “th” sound (since the ladies have mocked her for saying “Sank you”) is inspired by the word “nothing” to burst out in an inspired version of Elvis Presley’s Hound Dog.

She and Lucy are very funny about a casserole one lady has given them, exclaiming “They put cheese on everything!”

Mr. Chu has fewer chances to amuse, but Fenton Li makes the most of those, especially when sympathizing with Darren on Bewitched. “Those women make him do everything!”

Unexpected news brings a confrontation in which Mr. and Mrs. Chu express what the Japanese invasion did to their families, and Mr. Yamamoto tells how internment wrecked his life and family. Even though decades have passed, the wounds are still painful. It seems that it is up to Lucy, a generation removed from the horror, to make a fresh start, and her love for Mr. Yamamoto points to hope.

The actors are wonderful. The characters are well drawn, and their story is moving and relevant. As a bonus, there are some neat special effects with snow. You can’t have a play set in Canada during the winter without snow!

Issei, He Say runs through May 20. Tickets are $46. Premium seats (aisles and front row) are an additional $5.