Drivers reminded to ‘Move Over’ this summer 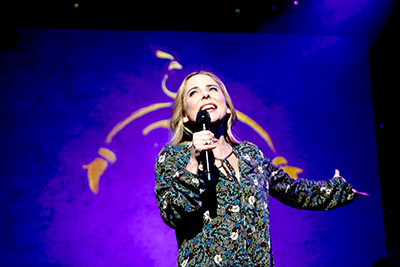 Long Branch — Aspiring young actors have a real treat in store if they are enrolled at Seashore Theatre Camp this summer.

To kick off the first week of their program, Tony nominated Kerry Butler, one of the leads of Mean Girls, will conduct master acting classes to teach them techniques that have made her one of the most sought after stars on the Great White Way.

“I love working with kids because their enthusiasm is infectious,” an effervescent Butler said. “I was nine when I started acting and still take lessons to this day because you can always learn more.”

Mean Girls is her 11th Broadway show. After doing commercials, television and graduating from Ithaca College where she majored in musical theater, she toured with the musical Oklahoma! in Europe as Ado Annie and debuted on Broadway as Miss Jones in the musical Blood Brothers.

Butler went on to originate the role of Belle for the Toronto production of Beauty and the Beast, where she was nominated for a DORA Award, and then transferred to Broadway. She also played Eponine in Les Miserable and Penny Pingletown in Hairspray, where she was singled out of the star studded cast for her “sparkling performance,” earning nominations for the Drama Desk and Outer Circle Awards, and winning the Clarence Derwent Award.

As Audrey in the Little Shop of Horrors, Butler received an Outer Critics Circle nomination. And her role in Xanadu, which required singing, dancing, alternating between three accents and roller skating almost the entire show, was nominated for the Tony Award for Best Peformance by a Leading Actress in a Musical and the Drama League Award for Distinguished Performance.

In addition, Butler briefly played Sherrie in Rock of Ages, and reprised the role of Brenda Strong in Catch Me If You Can, where she was nominated for another Drama Desk Award for Outstanding Featured Acress in a Musical.

She shared a stage with James Earl Jones, Candice Bergman and Angela Lansbury as Mabel Cantwell in Gore Vidal’s political drama The Best Man, and was Marianne in the musical comedy Disaster! before being cast in Mean Girls as Ms. Norbury (played by Tina Fey in the film), Mrs. Heron and Mrs. George, where she has been recognized by reviewers for her standout performance in three very different roles.

Of all of these shows, roles and being nominated for one award after the next, what was her favorite?

Seashore Theatre Camp is ecstatic about her upcoming visit. While her list of accomplishments are endless, this renowned Broadway star appears remarkably unaffected by her success, is easy to talk to, down to earth and nice.

“We are thrilled to have someone as talented as Kerry come to our theatre and share techniques with our campers,” founding Theatre Camp Director Renee Harrison Pincus said. “As part of the class children will learn acting, singing and dance skills that will take their August 10-12 performance of Mary Poppins to a much higher level. In addition, they will have a chance to ask questions and get tips about auditioning for roles on Broadway.”

And there is more. Butler has arranged to have campers participate in a Meet and Greet with the cast after they see Mean Girls August 15.

“While we have had the privilege of taking workshops with Tony nominated stars like Chad Kimball last year in Come From Away and Memphis right after it won the 2010 Tony, this is the first time a Broadway star is teaching a class in our theatre on our stage,” Harrison Pincus said. “There are no words that describe the excitement the 34 children in our program feel about meeting her,” she said.

According to Harrison Pincus, this is the 12th season for Seashore Day Camp’s Theater Camp “On Broadway.”

“There is no other theatre camp that offers this scope of opportunities,” she said. “Along with spending seven weeks rehearsing daily for large scale shows that bring the house down year after year, children see Broadway matinees including this year’s Frozen and Once On This Island and participate in workshops at New York City rehearsal studios with stars in the shows they see. To give them a complete summer experience, they take swim lessons, cool off in the pool pavilion in afternoon free swim and participate in special events every Friday.

Seashore Theatre Camp is part of Seashore Day Camp, which is currently celebrating its 92nd summer. More than 45,000 children for nearly a century say their best summers have been spent at Seashore. To find out why, call 732-222-6464 or visit www.seashorecampandschool.com.