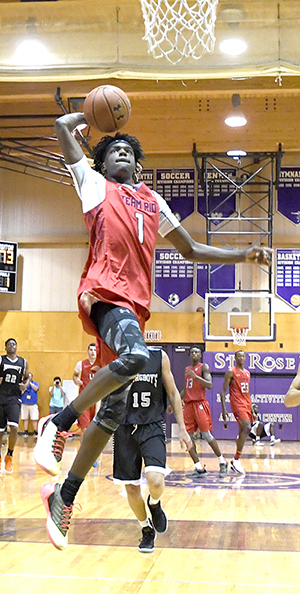 For the first time in the 48-year history of the Jersey Shore Basketball League a team consisting of exclusively high school all-stars played a game against a JSBL squad.

Team Rio National, an AAU squad coached by former Rutgers head coach Mike Rice, features high school all-stars from the tristate area played an exhibition game against one of the newest teams in the JSBL, Doughboys.

Greg Kopalko, Chairman of the JSBL and previous team owner, wanted to do something different this summer and to bring a spark back into the league.

In its glory years the league had former or current NBA players make appearances along with the Division 1 players and those who play or played overseas. Last year, history was made when the first female played in a game for the back-to-back champions Sea View Jeep. So, Kopalko contacted Rice to see if his team would be willing to make an appearance in the JSBL.

Originally the game was scheduled for opening night against one of the most competitive teams in the JSBL – Sterns Trailer – however, insurance complications were not worked out in time for that game. Kopalko and Rice then came to an agreement on July 17, and the opponent was Doughboys.

Most of the players on Doughboys have a strong connection to the area. Louie Pillari played at CBA and is now at Monmouth University, Brendan Barry from Rumson-Fair Haven and Dartmouth, Devin Jensen out of Manasquan and Merrimack, and Jason Dunn from Matawan and Hartford along with a few other guys where the opponents for Team Rio. Austin Whitehurst, who played at Monmouth Regional High School and Brookdale, is the head coach of the Doughboys.

Scottie Lewis, 6’5” high school player from Ranney School in Tinton Falls along with his teammate Bryan Antoine, who is 6’7” were two local guys who led Team Rio National in the game. “I have been hearing about the JSBL since I moved to Jersey,” said Lewis who has lived in Hazlet since sixth grade. “A lot of the area players get together and it’s just a great competition and fun thing to be a part of. So when we go invited, we jumped at the opportunity.”

Doughboys took control early and Team Rio looked a bit nervous for the first few minutes. Then the high school players settled into the game and did what they do best. Run fast, jump high and make great shots. Some of the JSBL fans and coaches thought the game would be a blowout with Doughboys winning by 20 points. They were so wrong!

Antoine said that during the AAU games he and his teammates can usually find one weak player on their opponent’s team and attack that player. “We can’t do that tonight as Doughboys have Division 1 players with lots of experience and some of those guys are really big at 6’8” and are very crafty with the ball.”

JSBL games are usually high scoring as defense is not as visible and Team Rio National took advantage of that and played aggressive defense. They even applied full court pressure, something you never see in a league game.

The result was that Doughboys really worked hard for their 130-123 victory. Pillari was high man for the winners with 33 points and three assists. Barry finished with 25 points, four assists and three steals.

Big Aidan Igiehon, 6’10” center for Team Rio National, who plays for Lawrence Woodmere Academy in NY, is about to make a monster dunk during the JSBL game against Doughboys.