Unity Tent to connect the city 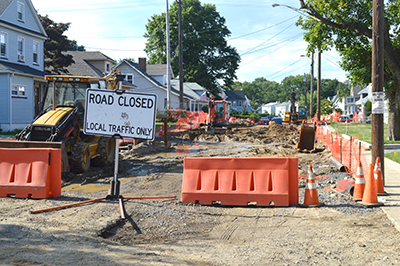 At the end of May, North Fifth Avenue was closed to fix a flooding issue, but hit many delays, keeping it inaccessible. Officials hope to reopen it next week.

Long Branch — The whole thing started with a bump in the road, and along the way they hit a few more, literally and figuratively. 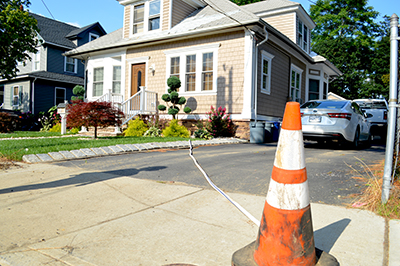 Up until last week the water to homes came from a hose hooked up by the water company to the water supply main at the sidewalk. 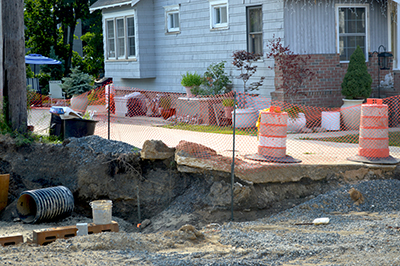 Taken last Wednesday in this condition, this driveway is now smoothed out. Hopefully by the end of the week, cars will have access to the street.

There is a hump that runs across North Fifth Ave. that’s caused by the old Conrail railroad tracks. Built in the 1800s, a train line used to run through Long Branch to New York beginning in Eatontown. The line was shut down in the 1960s but the tracks still remain, as does the Conrail right of way — tracts of vacant land that still run through Long Branch and local towns. Over the years some residents have “adopted” the land and take care of it, but do not own it.

The hump created by the tracks has been the cause of flooding on North Fifth and the city decided to have the hump graded down.

The work began at the end of May — and eleven weeks later the road remains closed to through traffic. Residents who live where the road is torn up can’t park in their driveways, and more than a few are getting impatient about the ordeal.

“We weren’t even told what was going on,” a few residents complained. “One day construction began and our front lawns and street were torn up!”

That was over 11 weeks ago. “We think it’s only fair that we should have been informed, at least tell us when it will end.”

“My heart goes out to those people,” said City Administrator Kevin Hayes. “They shouldn’t have to go through this. It’s been a nightmare.” Hayes said he goes down there every day to check on the progress.

He said that rain has been a big factor in delaying construction and so has complications with utility companies, water and gas. “Sometimes one has to wait for the other,” Hayes said.

“It’s coming up on three months,” said one resident. “It’s getting tiresome to drag our groceries to our house because we have to park down the street. It’s even worse for those who have children.”

Mayor John Pallone said when he realized that the project had been going on for so long he, along with councilwomen Anita Voogt and Rose Widdis, went door to door on Fifth Ave. to assure people that the city was trying to resolve the problem.

“We wanted them to know that we are here and listening,” he said. “We really appreciate their patience.”

“We hope to have the street at least graded and opened for traffic so people can get to their homes by the end of the week,” said David Barattucci, who works for Carroccia Contractors, the company in charge of grading and paving the street. He was finishing up work for the day on Tuesay evening.

He said the rainwater used to run through grates that ran over driveways. They’ve removed the old system and have put in 48-inch pipes that will be able to handle higher quantities of water. “Those pipes (not hooked up to anything yet) are in preparation for phase two of the project,” he said.

Phase two will require digging up the grassy area of the Conrail right of way that runs east/west and laying new pipes. The 48 inch pipes now running along North Fifth will connect to those pipes and bring water to a retention system near Rockwell Ave. and Halberton.

“That phase will probably begins next year,” Hayes said. “Definitely not this year.”

Lowering the profile of the hump will create a gradual two foot dip in the road so the water will run along the curb and into the new grates.

“We hope to have the road graded by the end of the week,” Barattucci said. “We will get a lot of work tomorrow,” he said. “Depending on the rain.”

City officials say asphalt installation on North Fifth Avenue is scheduled to finish up by the end of next week, weather permitting.
There have been delays in the project. The contractor for the road needs the water company to complete its work first before it can implement parts of its schedule.

In addition, forecasts call for rain most of the week, which may mean that the roadwork could have to be altered because of the weather.
But if things go according to plan, this week began with the contractor removing curbs and sidewalks.

On July 27, they will be installing new concrete curb and sidewalks.

July 30 is the day when they complete grading and initiate base asphalt  which should be completed on July 31.

On Aug. 1, they will complete any remaining milling and clean up.