Three join up to run for Long Branch school board 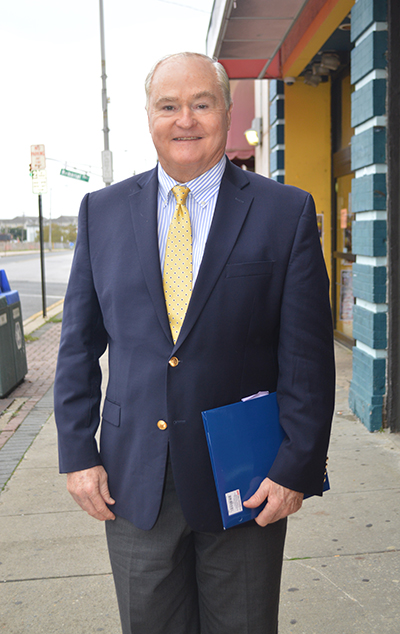 Freeholder John Curley, previously a Republican, is running as an independent this year. He says his record shows that he’s capable of saving Monmouth County money without losing jobs, and that he isn’t afraid to speak out when it’s unpopular to do so.

Last December, the other four Freeholders voted to censure Curley, saying that an investigation had found he made derogatory claims about employees. Curley denies these incidents took place.

Over the summer, the other Freeholders were found to be in contempt for publicly releasing information from the investigation, which was supposed to have been sealed.

Curley claims this is political.

“There’s no checks and balances in Freehold,” he says. “Quite frankly, there’s never been.”

He gives as an example when he filed his petition to run as a Republican. The chair of the Monmouth County Republicans — who is also the sheriff — objected to the petition. And the County Clerk, who certifies petitions and is also the co-chair of the county party, kept it from going through. Instead, the three-term Freeholder is seeking his fourth term as an independent.

But while he’s been a Republican in the past, he says he hasn’t ever been lockstep with the party — and that’s benefitted the county.

“I have been a political independent all the way through,” Curley said. “I just don’t fit with the bosses, really.”

Curley says he’s been willing to look at the records closely and bring attention to issues. He says he went after former Brookdale College president Peter Burnham, who was convicted of using college funds for personal expenses.

“He went to jail. I went through the budget,” Curley said.

He also said he’s saved taxpayers money by getting the county out of programs a county shouldn’t run.

That includes selling nursing homes Monmouth County was running. “Medicaid was not keeping up with the cost of health care,” he said. By the time Monmouth County sold it, it was $57 million over budget — and the entire county budget is only $461 million.

“There is no one who could sustain that.”

He also helped save about $3 million by privatizing drawbridge operations — Monmouth was the last place on the east coast that didn’t.

Curley says that many of the county’s plans need close scrutiny. He opposed to the county’s bonding given to FMERA, the agency that oversees redevelopment of the Fort Monmouth base, to buy much of the land from the army.

“That put all 53 municipalities in jeopardy,” he said. “The state of New Jersey washed their hands of FMERA.”

He also says he believes FMERA should give more power to the three host towns, Eatontown, Oceanport and Tinton Falls.

He worries some upcoming deals would cost taxpayers too much. That includes a proposal to buy Allaire Airport, saying it’s too risky and flights would interfere with developments planned for the area.

“One plane crash and all 53 municipalities in the county are out of business,” he said.

He also doesn’t like a proposal to let a dump in Southern Howell expand into a solid waste station. “There’s a lot of ground estuaries there,” he said. “A lot of them flow into the Monmouth County reservoir.”

Curley said that when he came in, he brought a 23-point plan to reduce spending, based on zero budgeting. One thing he worked on was job consolidation — but not firing people.

One person could be paid a higher salary to take on more responsibilities, and jobs could be eliminated through attrition. Similarly, some work was moved away from the county.

He has never voted for a tax increase. “I tell people it’s prioritizing. Just like you would do for a business.”

While Curley may have criticisms for the Board of Chosen Freeholders, he has nothing but praise for the county employees.

“I’m so proud of the Monmouth County food drive which we coordinate,” he said. Employees are always eager to contribute to the Fulfill food pantry.

He’s been advocating pay increases for employees, since some need to work second jobs.

Curley said that he’s proud of how the county can reach out for those in need. It’s set up the SCAT system to provide transportation for seniors, has programs for veterans so they don’t need to deal with the difficult Washington DC bureaucracy, and reaches out to many others.

One day he got a call. “A man said I just paid for my wife’s cancer medicine and I don’t know how we’re going to pay for that.” He was happy to be able to direct him to the right people in the county.

“I do promise when I am re-elected I will continue in the same vein of being a watch dog,” Curley said.