Dealing with the cold and homelessness 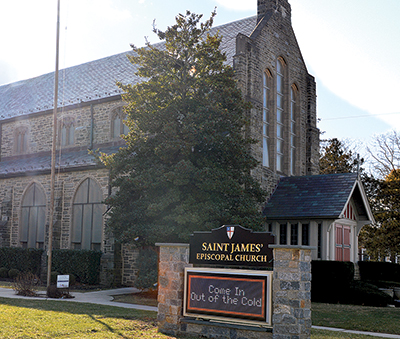 Long Branch — Wednesday night, as the forecasts called for snow, temperatures dropping down to 5 degrees Fahrenheit and wind chill that made it feel like 14 degrees below zero, St. James’ Church on Broadway was turned into a Warming Center for those in need.

On Tuesday, in response to a Code Blue Alert that Monmouth County had issued for extreme cold predicted in the coming days, Mayor John Pallone, officials from St. James’ Episcopal Church, volunteers from the Family Success Center, along with other concerned residents met to discuss options.

From 6 p.m. on Wednesday evening to 6 a.m. the following morning, the church was scheduled to provide space in the community room for residents who needed to get out of the cold. Volunteers were on hand to serve coffee and donuts.

“I want to thank all the volunteers who came together to make this warming center possible, especially St. James Church for hosting the center. Depending on the success of the Warming Center on Wednesday the 30th, we would like to continue being able to offer this to our residents,” said Pallone.

Before the latest Code Blue, the city had been looking to improve its situation with regards to warming centers.

On Jan. 21, Martin Luther King Jr. Day, when the temperatures dropped into the single digits, the homeless and those who needed warmth had trouble finding places to stay.

At the Long Branch City Council meeting on Jan. 23, several people spoke about the situation.

OEM Director Stan Dziuba said that the city had a plan in place for extreme weather.

“When Code Blue is declared, I call Dr. (Michael) Salvatore,” the superintendent of Long Branch Schools. A school building can be used as a warming center in the winter, or cooling center during a summer heat wave.

If anyone who needs warmth contacts the Long Branch Police Department, they are connected to county services for assistance.

Dziuba said that two people took advantage of it. He also says that he speaks with the homeless when he knows there might be a need for shelter. Often, those people don’t take the city up on the offer.

“They keep refusing,” he said.

People at the council meeting speculated that some of those who might need a warming center might not want to associate with police or government authorities, such as undocumented immigrants.

Several speakers said volunteers had prepared flyers to distribute around the city with information on warming centers available, but the data online was out of date or incorrect, causing confusion and problems.

Dan Schlenger, who is homeless, said he had talked to Dziuba before the cold snap, and there was a serious problem with lack of shelters in the area.

“There is nothing in Long Branch. Nothing for the homeless,” Schlenger said.

When he started looking for warm places to stay, the only available one in the county was Trinity Church in Asbury Park. The Red Bank warming center started by Jon Bon Jovi wasn’t available. The Long Branch Senior Center often provides warmth, but it was closed due to Martin Luther King Day.

It is difficult to ascertain the extent of the problem.

“I don’t know how many homeless there are,” said Schlenger, who said he mostly stays in the West End area. “Nobody wants to step forward and say ‘I’m homeless.’”

“It was minus 17 degrees two days ago, and I was out there.”

“Just giving you guys a heads up,” Schlenger said.

Even when there isn’t an extreme cold condition, homelessness can be a serious problem in the area. City resident Marcia Brown said she had been trying to assist in one such situation.

“Our Women’s Bible Fellowship has been informed a woman with four kids was being put out of her home,” Brown said. The home was in bad condition, but the woman had no place to go.

They first contacted the Long Branch Housing Authority, and were informed that the authority has no spare units. The Family Success Center said it may be able to help, but that takes time. There’s a homeless shelter in Freehold, but it doesn’t seem like an appropriate environment for four children, Brown said.

Brown said that she’s called Pallone and discussed making facilities available “at least for emergencies” to house families with o where to go.

She also said that Newark, where she works, has a special tax on shipping containers coming through the port which goes to helping the homeless. Other towns also have special taxes for that purpose, such as a special charge for online rental sites like AirBnB.

A 2018 study by Monarch Housing Associates indicated that on Jan. 23, 2018, there were more than 9,300 homeless people counted by volunteers on that single night throughout the state. A total of 332 were in Monmouth County, with 3 in Eatontown, 9 at Fort Monmouth, 6 in Long Branch and 3 in Ocean. The numbers overall were up 12 percent from 2017. While a point-in-time survey was done this year, statistics are not yet available.

The study only includes people who were counted that evening.

At the council meeting, Pallone said that he had been working on the warming center issue, having met with Dziuba and David Perez, a social worker employed by the Long Branch Public Library.

He also said he had faith Long Branch could find a solution. He noted that Council President Rose Widdis had started the Office on Volunteerism.

“Council President Widdis has basically started what is in essence an umbrella for volunteer organizations,” he said. This will make it easier for the groups to coordinate.