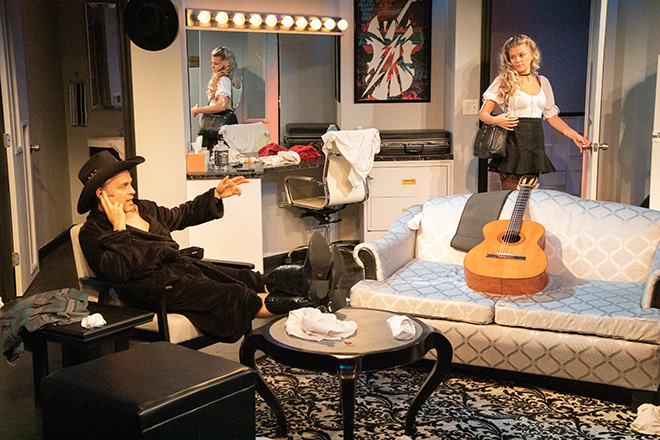 Long Branch — Christopher Daftsios, who wrote and stars in Lily, now having its World Premiere at NJ Rep, has created a juicy role for himself. Country music star Toby Crenshaw is an easy man to dislike. Within minutes of finishing his performance at a concert arena in Omaha, Toby has gulped a handful of pills and a swig of Jack Daniels, stripped to his red, white and blue briefs (hilariously sucking in his gut when others can see him), refused to do any encores or meet the mayor of Omaha, been gratuitously rude to his manager, Sam (Tait Ruppert) and his right hand man, Tommy (Adam von Pier) and revealed that he recently forgot his son’s birthday.

Yet even such a monster of ego and entitlement doesn’t deserve the torrent of physical and mental anguish about to be unleashed on him.

Tommy’s job includes screening young girls to entertain Toby in his dressing room after a performance, gathering their IDs to make sure they are legal and attractive.

At the head of the line on the night Lily takes place is “Haley from Georgia” (Joy Donze), beautiful, sexy, and full of secrets. Haley is clear that she is in charge of anything between her and Toby, and she uses her amazing strength and fighting skills to enforce her terms.

After sex, Haley reveals that she has the means to blackmail Toby, and some shocking news which will make the revelation of their intercourse the end of his career.

Special praise to Fight/Intimacy Director Brad Lemons. The violence is really scary. The “intimacy” is really believable, a good reason why no one under 17 is admitted to Lily.

Daftsios and Donze are excellent, and Ruppert and von Pier get to shine in two of the quieter moments of the play. While trying to find a solution to Toby’s problems, Sam reminisces about the happy day when he first discovered Toby’s talent and gave him the guitar Toby still cherishes. Tommy reveals to Haley that he might have been more than a combination bouncer and pimp because of a beautiful secret talent. Perhaps if his entourage had not coddled and enabled him, Toby could have been the decent human who sometimes appears behind his facade.

The setting by Jessica Parks is a dressing room with kitchen facilities and an en suite bathroom. It is so nice that my husband joked it might be a mistake, since the actors at NJ Rep might demand equal facilities. Let’s hope that instead they keep presenting thought-provoking drama.