Theater Review: Tender and powerful performances on display in Bone on Bone 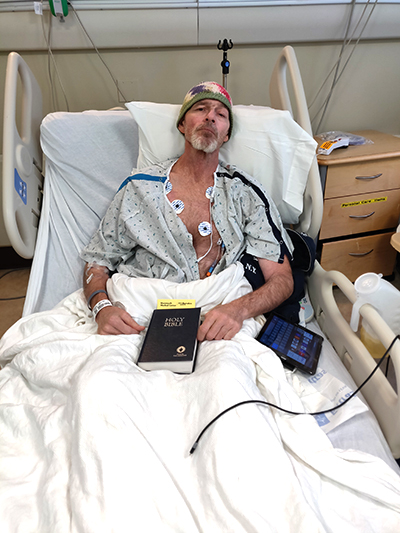 On Friday, Oceanport resident Jeffrey Oakes, advocate for medical marijuana, announced he would be discontinuing eating and medical treatment.

Oakes, who has been battling cancer for years, said it had spread to his lungs, there were no good treatment options left for him, and he was tired about fighting with the doctors at hospitals for his medical marijuana.

“I’m now on a hunger strike,” he told The Link News, adding he was refusing medical treatment.

About four years ago, Oakes was diagnosed with cancer. The prognosis was grim and he was given only a few months to live. But among other things, he received a prescription for medical cannabis, and he credits that with keeping him alive as long as he has.

But the cancer has continued to spread, he said, metastasizing into his liver, and there is now a spot on his lungs.

His doctor, he said, has told him he may take as much (marijuana) as he needs. (New Jersey law allows this for terminal patients.)

“I can’t do chemo. I don’t have any medical options,” Oakes said. “My only treatment is medical cannabis.”

On Thursday, Jan. 9, Oakes went to the hospital after having trouble keeping food down. He was given intravenous fluids.

But using cannabis in hospitals is problematic. New Jersey law may permit it for medical treatment, but federal law doesn’t, and organizations are still grappling with the situation.

Oakes said he’s been in hospitals where “they looked the other way” when edibles are brought in, but not all do. He didn’t bring any to the hospital last week, aware that his room has been searched for it at times.

It’s the only drug he’s found effective in treating the pain, and he hasn’t been able to use it properly there, he said. At most, they’ve wanted to hold on to it and control the usage.

“I said, if you can’t take care of me, allow me my medical cannabis,” Oakes said.

Oakes said he was almost put on suicide watch, but talked them out of it. If he decides to actively end his life – legal in New Jersey – he said he’d seek professional assistance.

Oakes thinks he has the law on his side. Last July, New Jersey passed Jake’s Law, which said, among other things, use of medical cannabis “shall not constitute the use of an illicit substance or otherwise disqualify a qualifying patient from needed medical care.”

While I was speaking with Oakes at the hospital, a member of the cleaning staff came in. When Oakes mentioned dying, she said her brother was in a better place now.

“If I find him, I’ll take care of him for you,” Oakes said, embracing her tearfully.

He was reading the Bible when I came in. Oakes, who was raised Catholic, said he was seeking comfort, looking for a verse that was often used by marijuana advocates to show that they have a moral right to it.

It’s Genesis 1:29: “And God said, Behold, I have given you every herb bearing seed, which is upon the face of all the earth, and every tree, in the which is the fruit of a tree yielding seed.”

Oakes said he’s been working to have people understand and empathize with those who need medical cannabis.

“They need to drop the idea of policy and come up with morals,” he said. “That was my goal. Not to have my cancer be pointless.”