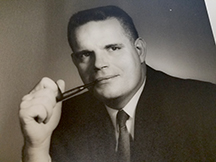 George P. Hoffman, 88, of Long Branch passed away peacefully at home surrounded by the love of his family on Monday, April 20,2020 .

Born in Newark, NJ he moved to Eatontown, NJ in the early 1940’s. A graduate of Red Bank Catholic High School, he went onto graduate St. Francis College, Loretta, PA, he was commissioned as a Naval Officer, in Newport, RI in 1953, earning the rank of Lieutenant. Following his honorable discharge from the Navy, he graduated from American Academy of Funeral Service, NYC, NY in 1957, ranked number one in his class. Together with his wife, Virginia, he established the Hoffman Funeral Home in 1963.

George had a passion for boating and being on the water. He volunteered for decades with the United States Coast Guard Auxiliary, Flotilla 2-7, even serving as Flotilla Commander.He was a dedicated “Life Member” and Past Commodore at the Long Branch Ice Boat and Yacht Club, Long Branch. George and his wife, Virginia, enjoyed taking their boat, the Virginia Marie, up the Hudson River and to the Great Lakes for annual voyages.

In lieu of flowers donations in George’s memory to St. Jude Children’s Research Hospital, 501 St. Jude Place, Memphis, TN 38105-9959 or at stjude.org/memorial would be greatly appreciated.

Funeral and burial services will be private. A “Celebration” of George’s life and Memorial Mass will be held when appropriate. Condolences and memories may be left at www.Hoffmanfuneral.com..