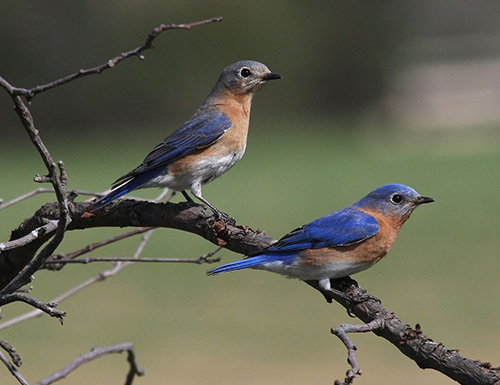 If bluebirds are a symbol of happiness, here’s some extremely happy news: New Jersey is the nation’s top state in expanding its population of bluebirds! 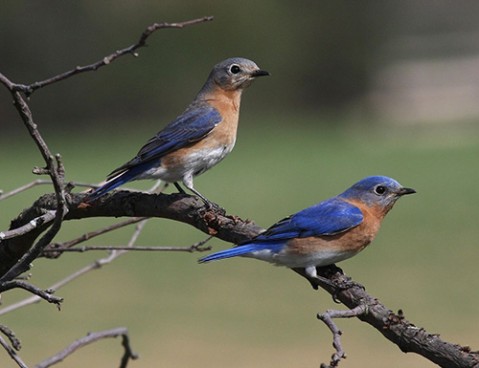 According to Allen Jackson, president of the New Jersey Bluebird Society, a national survey of breeding birds for 2005-2015 shows that bluebirds in the Garden State are increasing their numbers by about 7 percent annually – a higher rate than any other state. “New Jersey’s trend is number one in the U.S. for bluebirds,” he proclaimed.

This good news comes at a time when the populations of many bird species, including both forest birds and common backyard species, are dropping precariously.

With the males’ brilliant blue plumage and flash of brick red on the breast, Eastern bluebirds were once common up and down the East Coast, especially in open areas with little understory and sparse ground cover. But their population plunged from the 1930s through the 1970s due to habitat loss, pesticides and competition from aggressive non-native birds like house sparrows and starlings.

Happily for these small thrushes, human helpers have stepped in to tilt the odds back in their favor. All across New Jersey, especially in the southern counties, bluebird lovers have put up thousands of nest boxes to give their feathered friends a much-needed boost.

Allen has installed over 1,000 nest boxes in South Jersey, many of them built by teacher David Moyer’s wood shop classes at the Middle Township Middle School in Cape May County. And citizen scientist Nels Anderson, known as the “bluebird whisperer of the Pine Barrens,” has built, installed and monitored hundreds of boxes on public open space for more than two decades. He started in 1999 in Wharton State Forest, and in 2007 expanded into the Franklin Parker Preserve in Chatsworth.

Bluebirds are well suited to nesting in man-made boxes. They’re what are known as “secondary cavity nesters,” meaning they historically build their nests in holes in trees left by woodpeckers. In the absence of woodpecker holes or other natural cavities, they will readily accept boxes. They also don’t mind being close to people, so boxes placed near homes won’t scare them away.

“Over the last four years, we’ve had about 14,000 baby bluebirds fledged,” said Allen, a wildlife biologist who lives in Millville. Last year alone, 4,200 bluebird chicks successfully left their nests in bluebird boxes. And due to this past warm winter, 2020 is shaping up to be a banner year for bluebirds as well.

Unlike some birds which lay only one clutch of eggs each year, bluebirds are prolific breeders, laying two or even three clutches of up to five eggs. This helps compensate for the low survival rate of fledglings due to predators, disease, and deadly cold and wet spells in spring.

Want to help bluebirds by putting up boxes on your property or a public open space near you? For best results, make sure you do it the right way, advises Allen.

·         First, check that the bluebird box you buy or build meets design standards posted on the New Jersey Bluebird Society website. A flimsy or poorly ventilated box could put bluebird chicks in danger, and a too-large opening will allow bigger birds and critters inside.

·         Location, location, location! Bluebirds are insect eaters, so boxes should be located next to open fields, meadows or grassy areas with plentiful food sources … but with a tree or shrub nearby to provide a safe landing point above the ground.

·         Protect bluebirds from predators like snakes and raccoons by mounting boxes on poles equipped with predator guards. “The worst thing you can do is put a box on a tree” because trees are easy for predators to climb, says Allen.

·         Monitor bluebird boxes to learn what’s going on inside. If snakes, mice, ants, wasps or other uninvited critters have taken up residence, evict them! Keep notes on key dates – when eggs are laid, when they hatch, when nestlings fledge – to help the cause of citizen science.

In normal years, the New Jersey Bluebird Society distributes nest boxes built by the Middle Township students. But because of coronavirus-related school closings, the inventory is running low and likely will not be replenished until fall. But that shouldn’t affect the prospects for the continued recovery of bluebirds in New Jersey.

“People believe in the environment and want to do something for bluebirds. The program grows like a snowball rolling downhill,” said Allen. “What we’re doing now will ensure that we’ll have bluebirds around for future generations to enjoy.”

For more information on bluebirds and how to help them nest near you, visit the New Jersey Bluebird Society website at www.njbluebirdsociety.org. You can also see photos of bluebirds and hear recordings of their songs and sounds.