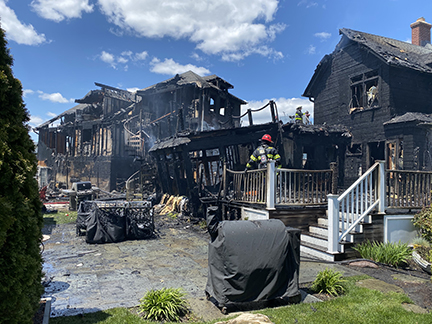 By Patty Booth O’Neill, Monmouth Beach – Firemen fought a large conflagration and the wind on Tuesday morning beginning around 11:10. Several roads into Monmouth Beach were blocked off as a three alarm fire broke out on Valentine St. involving two homes off of Riverdale Ave.

Fueled by the wind the fire began at one home and spread to the house next door. The homes belonged to Keven and Rose Dougherty and Susan and Eddie Coolahan.

Just when it seemed as if the fire was under control, the wind would pick up and the blaze would flare up again.

A cause has not been released, and at this time no injuries have been reported.

Photos from the start of fire, pictures of the back of the house where the fire started and many firefighters