Charles Richard Schwartz of San Antonio, caring brother, uncle, and friend passed away peacefully on November 9 at the age of 93.

Christmas trees are now on sale! 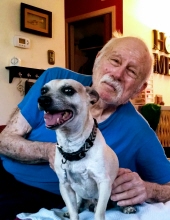 The son of George and Elizabeth Schwartz, Charles was born on March 4, 1927, in Newark, N.J., and grew up in the company of two older brothers, George and Robert. The family attended Central Christian Church in East Orange, N.J., where his mother played the organ. He didn’t much care for school when he was young, but he enjoyed social studies and shop class.

Charles considered himself a bit of a black sheep but the one thing that bound the family together was music, with all three sons eventually growing up to be professional musicians and music teachers. As a teen, Charles took an eager interest in jazz and swing music and frequented as many nightclubs and theaters as he could to see jazz greats like Benny Goodman, Louis Armstrong, and Cab Calloway.

At the age of 17, Charles entered the Navy, serving as a helmsman aboard the USS PGM 32 and other ships. He was awarded the rank of Radarman, 3rd class, within six months of his entry into the service, and received one battle star for witnessing the Battle of Okinawa. He experienced a number of dangerous and difficult experiences during his time in the service and told stories of the close encounters he had during minesweeping operations. He was discharged in 1946 and attended college, first at NYU and then at Rutgers University, graduating in 1951 with a double major in Social Studies and Industrial Arts and a minor in music.

He became a teacher, first serving at a school in Sea Bright, N.J., where he taught Industrial Arts to kids from grades 1-8, and also served as the gym teacher and school nurse. During the summers, Charles worked as the Night Manager of the Peninsula House Hotel. It was here that he received nightly phone calls from one Frank Sinatra to his mother, a hotel patron. For years afterward, Charles enjoyed recounting those phone calls, saying, “Bet you never knew Frank Sinatra was a mama’s boy.”
For upwards of 30 years, Charles worked in a variety of positions in the field of education, serving as Industrial Arts teacher, coach, band director, health teacher, math teacher, and finally principal for a number of schools in New Jersey, all while playing weekly jazz gigs with his trombone. He had many ups and downs in his educational career but loved teaching kids and making a positive difference in their lives. When school administration proved too strenuous and political for Charles’ liking, he went back to his roots and took a job as a music teacher for five different N.J. Catholic schools which eventually led to his opening a successful musical instrument rental business and teaching studio. He also fulfilled a lifelong dream by playing trombone for a few years in the New Jersey State Orchestra until its dissolution.

In 1986, Charles developed chronic tendonitis in his elbow which prevented him from playing trombone and teaching. He decided to dissolve his business, but he felt proud of his accomplishments. He moved to San Antonio, Texas, in the late 90s, intending on retiring, but instead became active on the board of the Harmony Hills condominiums where he lived, eventually becoming manager of the entire complex. He served in that role for 9 years before actually retiring at the age of 80, buying a house nearby, and living with his beloved pups, Mr. Pooch, Little Lady, and Little Guy. For the last year of his life, Charles lived at Casa Felicitas and developed friendships with all the kind and loving caregivers there.