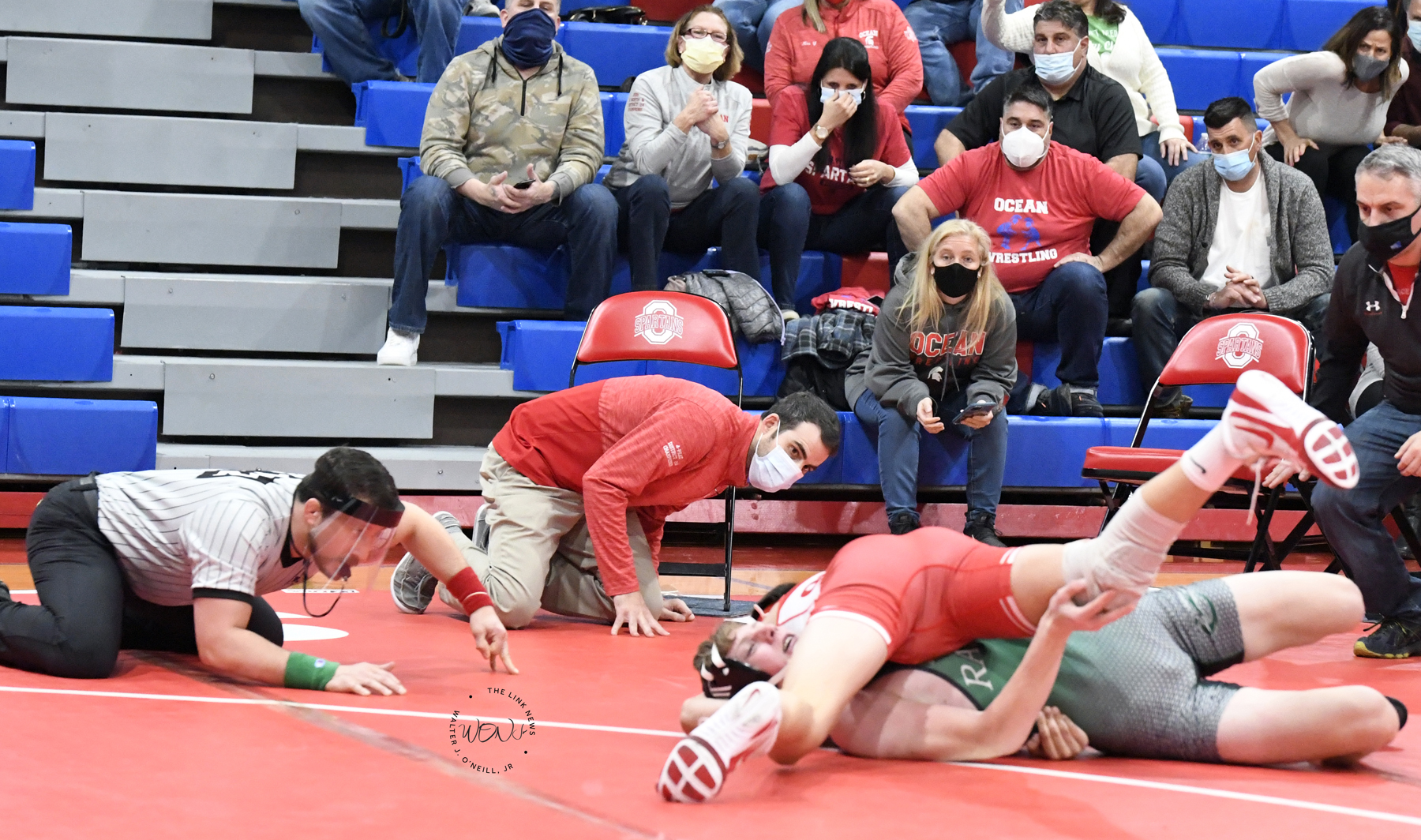 By Walter J. O’Neill, Jr
March 17, 2021
St. Patrick’s Day is normally celebrated with the wearing of green. However, this past Wednesday night, it was all red in Ocean Township. The Spartans hosted the Rockets of Raritan in the opening match of the 2021 wrestling season in a A-Central contest.

Cippy Apicelli returns for his tenth season as head coach of the Spartans. This year as a result of the pandemic, the season kicked off nearly three months later than normal. One of the rules is that matches must alternate between mats and be sanitized after each bout. Wrestlers are given two tickets for spectators who must register with the school and pass a screening before entering the gym. Social distancing and mask wearing for all but the two wrestlers competing is required.

Ocean, which had a good year before the COVID-19 shutdown of 2020, has a slew of talented wrestlers on its roster this season. Of the 14 contested weight classes, Ocean won 10 in the victory over Raritan.

Senior Kevin Cartagena-Walsh was the first Spartan to compete in 2021. He scored a 4-0 decision over Jordan Rafalko of Rartian at 152 pounds.

The 160 pound match was won by Shane Cartagena-Walsh, a junior at Ocean. He scored a pin at 1:23 over the Rockets Robert Mulligan.

Raritan then scored three straight wins. The first was Kieran Falzon with a pin at 0:45 of the 182-pound match with Tah-Jay Phillips. That was followed by another Raritan pin at 195 pounds. Sean Lane put Mateo Chavarriaga on his back at 2:11. Nicholas Burns of Raritan then took a 6-5 decision at 220 pounds over Alejandro Villarraga. That bout went to overtime.

Spartans then went on a four match win streak. The first was Joseph “JoJo” Teresi at 285 pounds. He scored the fastest pin of the night at 23 seconds over Aswan Clark. That was followed by a pin by James Farina, the lightest Ocean wrestler. He put Matt Erven of Raritan on his back at 3:32 of the 106-pound match.

Blake Tarnowski took a 3-2 decision for Ocean over Ryan Mansueto at 113 pounds. Demetri Poniros also had a fast pin for the Spartans when he put Braden Kmak of Raritan on his back at 32 seconds of the 120-pound match.

One of the hardest and toughest matches occurred at 126 pounds. It was back and forth for two periods, but late in the third Zach Reilley of Raritan pulled out a 13-9 decision over Gio Poniros, a junior at Ocean.

The last three matches of the night went to Ocean. The 132 pound bout had AJ Benner getting a pin on Raritan’s Alex Auletta at 2:56.

Michael Poniros took a 9-2 decision for Ocean over Connor Newell at 138 pounds. The last contested match had Nicholas Benner getting a pin victory for the Spartans over Quinn Peters at 1:45.

The following night, March 18, the Spartans traveled to Wall Township where they defeated the Crimson Knights 51-18 in a non-divisional match. Following are the results of the Wall Township match.

106 pounds James Farina of Ocean getting a pin over Colin Roarty at 1:21

113 pounds Blake Tarnowski of Ocean getting a forfeit win.

120 pounds Demetri Poniros of Ocean had a major decision 13-0 over Jack Kinsella.

126 pounds Gio Poniros of Ocean scored a pin over Nicholas Vetrano at 1:45

160 pounds Shane Cartagena-Walsh of Ocean scored a pin over Nick Zamaloff at 3:04

182 pounds Jared Tracey of Ocean had a technical fall, 16-0 over Kelan Giaimo

195 Pounds Jaquari Medler of Wall scored a pin over Mateo Chavarriaga at 1:21

Additional photos can be found at www.Facebook.com/TheLinkSports