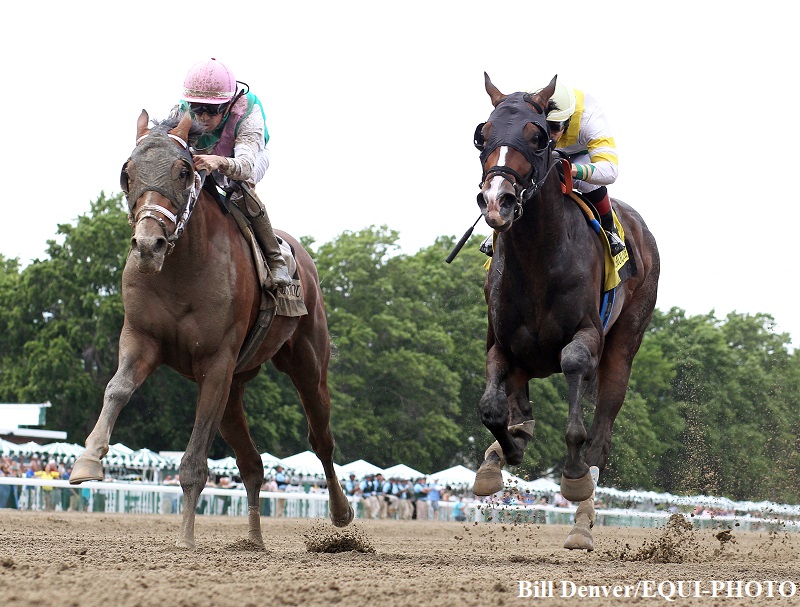 OCEANPORT  – Whatever plans trainer Brad Cox and jockey Florent Geroux had in their minds for how Sunday’s TVG.com Pegasus Stakes would unfold for Kentucky Derby runner-up Mandaloun were dashed a few jumps out of the Monmouth Park starting gate.

Forced to steady at the start and off last in the five-horse field as a result, Mandaloun needed to rally from further back than is normally his style, then was floated three-wide on the final turn before digging in for a neck victory over a stubborn Weyburn in the $150,000 feature race that serves as the local prep for the Grade 1 TVG.com Haskell Stakes on July 17.

“We didn’t expect that (being shuffled back at the start),” said Cox. “We thought he might be on the lead or tracking a couple. We found ourselves last going into the first turn. But overall it was a big effort. I think he closed into a soft pace.

“He probably had to start his run a touch early given the fact that he was last. He ran a big race. Florent made the comment that he may have been looking around late. But he made the lead by himself. Overall it was a good effort for him to ship over here.”

With longshot Lugamo setting the early fractions (:24.6 for the opening quarter, :48.61 to the half and 1:12.41 through three quarters) while being tracked by Weyburn, Mandaloun launched his rally three-wide going into the final turn after steadily moving up.

He surged past Weyburn and Dr Jack in mid-stretch and looked to be on his way to a clear victory until having to fight off the gritty Weyburn.

“Yes (he was steadied) a little bit (at the start),” said Geroux. “I didn’t want to rush him. He was nice and relaxed during the race. It was nice to see that he was able to settle down on his own and everything worked out great. The important thing was not to rush him too hard (after the start).

“I had a lot of horse. He was passing horses one by one. At the end when he made the lead maybe he was looking around a little. It was a new thing for him not having the whip for encouragement. I saw the other horse (Weyburn) coming inside of us. But he was still running pretty good at the end.”

“Once he passed me by a length and a half, Weyburn actually re-rallied again and he said, ‘Oh I got to get going again,’ ” said Dyland Davis, Weyburn’s jockey. “Once he re-rallied I thought we were going to go by and he was making a great run to get back up. I thought he was going to get back for sure. He just missed it but I like that encouragement and that competitiveness where he was able to fight him a little more and push back.”

Cox said he will ship Mandaloun back to Kentucky and assess how the son of Into Mischief came out of the race, with the $1 million Haskell Stakes still on his radar.

“I think ultimately we’re going to figure out what toll it took on him once we get back home,” said Cox. “The ship over for the race, the ship back. Things such as that. We’ll put it all together and process it and let him tell us where he is over the next couple of weeks.

“He made the lead and it looked like he was going to go on. Obviously the horse on the lead was setting softer fractions. You kind of expect that (he was forced to fight late). I don’t think that’s something that is totally unexpected. Overall it was a big race and we’re proud of the effort.

“He responded when asked and was carried a touch wide and floated through the turn. But overall it was a good effort and hopefully he can bounce out of it in good order and be ready in five weeks (for the TVG.com Haskell Stakes).”

The victory was the fourth in seven career starts for Mandaloun, boosting his career earnings to $1,051,252.