Our State of Mind – Making Juneteenth a National Holiday 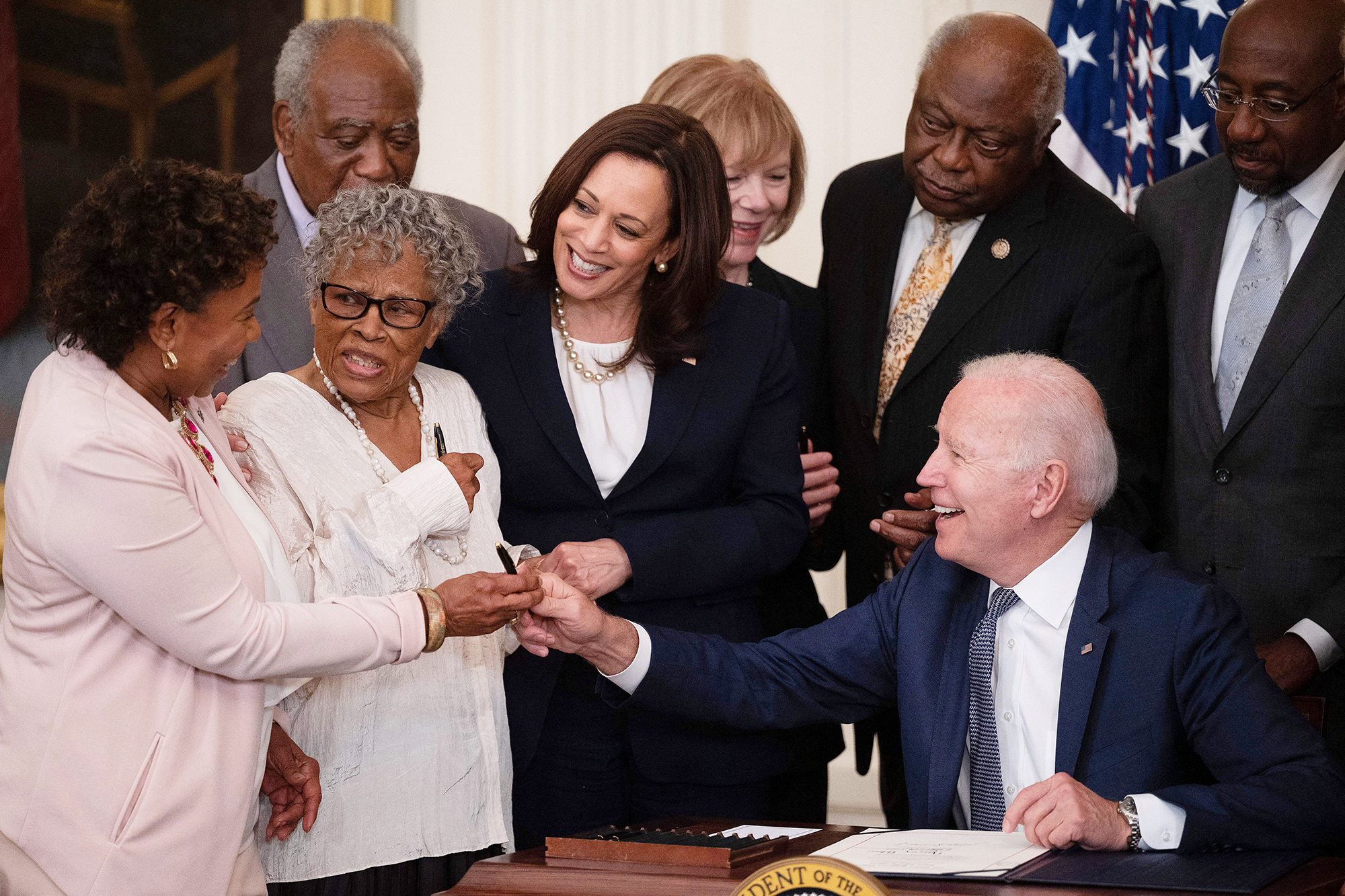 President Biden’s remarks at the signing of S. 475 are below:

“Juneteenth marks both the long, hard night of slavery and subjugation, and a promise of a brighter morning to come. This is a day of profound — in my view — profound weight and profound power.

“A day in which we remember the moral stain, the terrible toll that slavery took on the country and continues to take — what I’ve long called “America’s original sin.”
At the same time, I also remember the extraordinary capacity to heal, and to hope, and to emerge from the most painful moments and a bitter, bitter version of ourselves, but to make a better version of ourselves.
You know, today, we consecrate Juneteenth for what it ought to be, what it must be: a national holiday. As the Vice President noted, a holiday that will join the others of our national celebrations: our independence, our laborers who built this nation, our servicemen and women who served and died in its defense. And the first new national holiday since the creation of Martin Luther King Holiday nearly four decades ago…
“I’m especially pleased that we showed the nation that we can come together as Democrats and Republicans to commemorate this day with the overwhelming bipartisan support of the Congress. I hope this is the beginning of a change in the way we deal with one another.”
Ms. Opal Lee, 94, was a major advocate and supporter of Juneteenth becoming a holiday for all, in all 50 states, to celebrate the significance of the day and the significance as it relates to U.S. history.
For you see, her family’s home was invaded and burned down by a white mob of some 500 people, for the simple reason they lived in a white neighborhood, Black, and they celebrated Juneteenth in 1939. Lee was just 12 years old.
Lee’s petition to make Juneteenth a holiday was signed by a reported 1.6 million people. The 94-year-old walked two and a half miles to the White House in 2016 whenPresident Barack Obama was in office, to bring awareness to Juneteenth and to petition for a holiday.
Another announcement came from Linda Thomas-Greenfield, US ambassador to the United Nations made the following statement, in recognition of and the significance of June 19, 1865, that finally and fully abolished slavery in the United States.
“This Juneteenth, I reflect on my great-grandmother, Mary Thomas. She was born in 1865, the child of a slave. I am just three generations removed from her, but our lives could not be more different. My ancestors were enslaved, and now I represent America to the world as the Representative of the United States to the United Nations. It is a remarkable journey, but one that is far from complete. This legacy of enslavement and struggle compounds the responsibility I feel now to use my platform to continue the drive for freedom and equality in all places where they are lacking.”
Linda Thomas-Greenfield, US Ambassador to the United Nations
New Jersey Gov. Murphy proclaimed Juneteenth a state holiday in 2020,during the global pandemic. Therefore, New Jerseyans were already prepared to celebrate and educate on Friday, June 18, 2021.
On Saturday, June 19,Andy Kim, D-NJ made an appearance at the Willingboro Juneteenth Festival at Mill Creek Park.

Ms. Martin is an educator, freelance writer, and the 2008 Monmouth University Dr. King Unsung Hero award. She can be reached at ourstateofmindgap@gmail.com