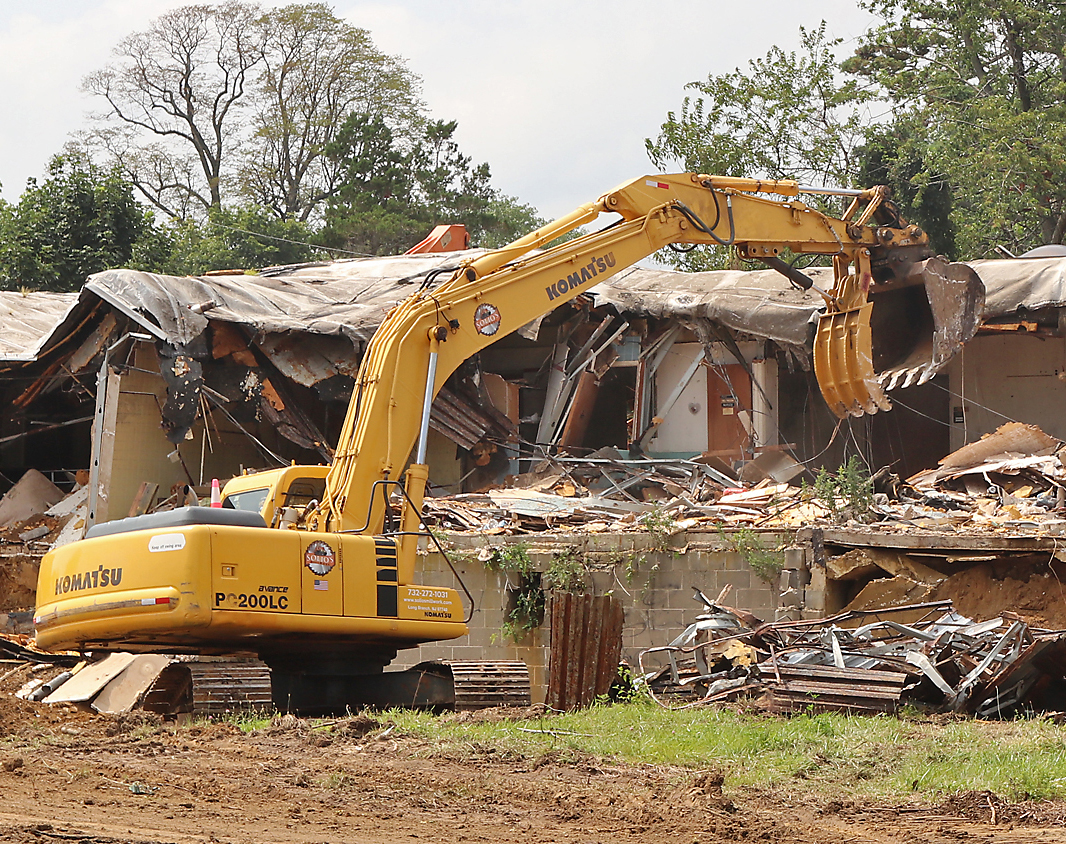 “We have… pushed very hard to get all of those down, “they’re an eyesore.” Mayor John Pallone

By Neil Schulman, Long Branch — A building which had been unoccupied for decades has come down, and it’s not the only long vacant property which has been demolished.

The red building (Dilgers) on Joline "Has been there forever".

At the August 11 City Council meeting, Councilman Bill Dangler noted that when driving to work on Joline Avenue, he saw that the red building was now gone.

“I was very surprised,” Dangler said. “It’s good to see it down.”

Long Branch Planning Director Nicholas Graziano said it was part of an ongoing effort to demolish long unused and vacant structures around the city.

“There’s a long list of buildings we’re working on,” he said.

Mayor John Pallone said the red building was just one example of the work to get rid of these dilapidated structures. He and the council had run on a campaign platform of clearing these eyesores.

The city also saw the demolition of Seaview Towers earlier this year, and has had three vacant buildings on Third Avenue torn down. It’s in the process of taking care of the old nursing home on Westwood and Bath avenues.

“We have… pushed very hard to get all of those down,” Pallone said. “They’re an eyesore.”

Council introduced an ordinance to bond $2 million to make upgrades and renovations to the Long Branch Senior Center on Second Avenue. The work is being paid for through the Developer Contributions Trust Fund.

Pallone said that the project includes work to the exterior, improvements to the lobby area, a fitness room, and more classrooms and storage space. The ordinance notes it will also include a new multipurpose room.

The funding comes funding given to the city’s developer trust fund by The Bluffs at Beachfront North, Pallone said.

The city is hoping that an energy aggregation program will allow residents to get greener power and lower power bills.

Council has introduced an ordinance to establish an energy aggregation program in Long Branch.

Council president Anita Voogt said that under this system, the city can go out and bid for an energy supplier to provide power to the entire city instead of using the standard utility companies.

Energy aggregation programs must go out to bid. Voogt said that the city would be looking for more environmentally sustainable providers as one of its criteria. Initially, at least half the power provided would need to come from sustainable sources.

If the bids are accepted and a different company is found to provide the power, bills would still be paid to JCP&L, which continues to maintain the infrastructure. By default, residents are automatically enrolled in the program. However, they have the option to opt out.